REPOSTED FROM DAMNED IF YOU DOOGS. ORIGINAL POST DATES FROM AUGUST 2, 2010.

With principal painting on the Mustang completed, it was time to move on to the detail work, beginning with the decals.

If you’re unfamiliar with scale modeling, the way the decals work may seem completely bizarre. They aren’t stickers. Instead, their water slide decals, which means you dip them in water, then slide them off their backing material and onto the model surface. This allows for thinner decals that can “melt” to various contours and into panel lines.

Decals always apply best to a smooth, glossy coat, so I prepped the P-51 by spraying it down with Future, which is actually an acrylic floor polish, but one that goes on thin, self-levels, and cleans up with Windex.

Most of the decals went on without incident. Micro-Set was applied to keep them wet while I positioned them, and Micro-Sol was applied to “melt” the decals onto the surface. For the most part this worked well, though I had some issues with decal film not quite vanishing, and several of the decals decided they had no intention of melting into the panel lines as thoroughly as I’d hoped.

Around this time I also discovered that I’d masked the red cowl too far forward, leaving an awkward gap just ahead of the exhaust manifolds. Oops. Next time I’ll be sure to test fit the decals on close fitting areas like this.

Once the decals were as set and melted as I could get them, I applied another coat of Future to seal them.

With the decals sealed, I next applied a weathering wash. I wasn’t having much luck with thinned enamels, so I picked up a bottle of ProModeller Dark Dirt wash. The stuff did a decent job, but was far more subtle than I wanted, and didn’t weather up the decals in any discernible way. Apparently it has more stick on a matte finish, so I may switch up my technique moving forward. 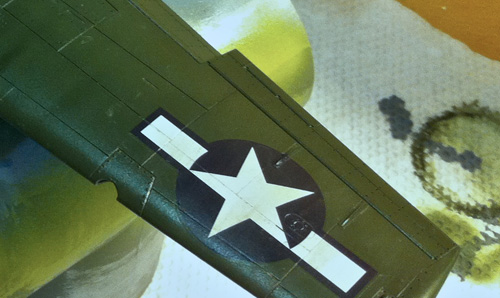 When the wash failed to weather things as much as I wanted, I tried out a tip I’d read about on a message board, and oversprayed the decals with thinned Olive Drab. This definitely helped tone them down and blend them into the overall paint scheme.

But I wanted more.

Ultimately, I ended up trying my hand at a technique that scares the bejesus out of me. Post-shading involves spraying highly thinned paint along panel lines and in the direction of airflow to provide some tonal variation. But it still involves basically painting an already painted-and-decaled model. I chose a mix of Flat Black, Flat Brown, and Olive Drab highly thinned with denatured alcohol. It worked fantastically well, save for one or two spots where it randomly went down very thick. Fortunately, a few quick shots of thinned OD blended it back to a manageable level.

Next came the gunport and exhaust staining. I tackled these by laying down a layer of thinned Tamiya Smoke, which is this fantastic translucent, oily-looking color. This was accentuated by black pastel chalk shaved down with an xacto and then brushed onto the model. The result was very subtle, which fits the very short service life of this aircraft, but I think I will definitely try to go bigger with my next kit.

Chipping was achieved using a silver Prismacolor pencil, tapped against the surface and along panel lines. Way more subtle than the silver-paint-and-a-toothpick approach I used in my prior model building days.I applied paint chips to the spinner and propeller blades, the leading edges of the wings, along oft-access panels (.50 cal ammo doors, engine maintenance hatches, etc), and along the wing root where the pilot and ground crew would scuff up the paint.

Once the chipping was done, I sprayed the entire Mustang down with Testors Dullcote to kill the glossy sheen.

I haven’t really mentioned the canopy much to this point. Way back before initial painting, I masked it off using an Eduard mask kit, which is basically pre-cut tape that exactly masks the clear areas of the canopy. Once the mask was in place and the inside of the canopy pieces masked off to prevent overspray, I painted them in Green Zinc Chromate first, so the interior color would show through, then painted them over in Olive Drab. 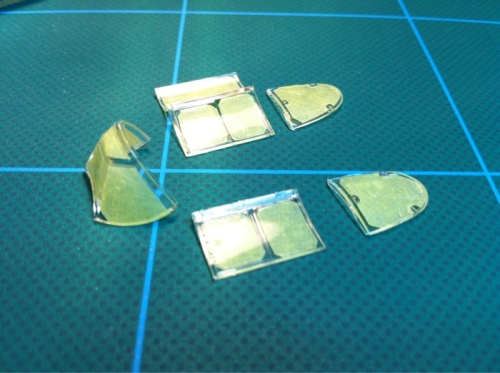 This actually worked pretty well, until I realized that, the way the P-51B’s canopy hinged open, segments of the canopy would essentially be seen inside out. And yeah, I’d sprayed the interior color first, but seeing it very obviously on the other side of a piece of clear plastic would just look silly. At first I tried to salvage the Eduard masks, which got kind of mangled in their removal, and when they proved unworkable I broke out the Tamiya tape and a sharp knife. After cutting a bunch of thin pieces, I carefully masked off the interior panels using the painted exterior as a guide, then brush painted the Green Zinc Chromate. I’d have really preferred to use the airbrush, but without the raised canopy frame to work against, I was having difficulty masking off the individual glass panes in their entirety.

Ultimately, it all worked out, just. Still, I’m glad that every plane on my build list (SBD-3 Dauntless, two F4F-3 Wildcats, a P-51D and a F6F-3 Hellcat) used a sliding canopy, so I won’t have to deal with this crap again for some time.

The landing gear and bay doors were attached using cyanoacrylate, while the canopy, antenna mast and other small pieces were attached with plain old white glue – mainly because it gives you a lot longer to work with fit than CA.

I also managed to lose one tiny, clear plastic piece that was supposed to fit into the fuselage just aft of the antenna mast. It’s somewhere under the workbench, but considering it’s clear and about the size of a gnat, it’s pretty much gone. I improvised and used a drop of thick cyanoacrylate in its place.

And with that, it was done.

Overall, the P-51B was a fantastic reintroduction to the world of model building. I learned a lot of lessons – both good and bad – and look forward to seeing where I can improve on my next build!