REPOSTED FROM DAMNED IF YOU DOOGS. ORIGINAL POST DATES FROM OCTOBER 15, 2010.

Some modelers have dozens of kits on the bench at any given time, all in various stages of completion.

I’m not the sort who could ever really work like that, but due to some delays with the Wildcats, I did find myself in a position recently where I had four different kits up and running at the same time. Now that the ‘cats are done and I’m down to two, it’s time to give them their proper introductions.

Everyone seems to have their own preferences when it comes to models. A lot of people seem to go in pretty hard for German stuff. In a way I guess it makes sense. Say what you will about their beliefs, the Nazis built some of the best-engineered and most distinctive hardware of World War II, and then went and covered it with elaborate, highly-technical camoflage. Their stuff was the Porsches and BMWs of WWII machinery. Literally.

Personally, I’ve built mostly American, with the odd British or German kit thrown in for flavor. But outside of a single MiG-29, I’ve never built a single Soviet anything. Or a Japanese anything, for that matter. So when someone kicked off an Ostfront (German for “East Front”) group build on one of the modeling forums I frequent, I decided it was time to tackle a few Soviet subjects for once. In total, I’ve got a whopping seven kits committed for this group build, but for now I’m just tackling two of the USSR’s most iconic fighters.

First up is the Lavochkin La-5. Like most Soviet aircraft, the La-5 was designed under the duress of war at a time when materials such as aircraft alloys were extremely scarce, so most of the plane was actually built out of wood and covered in a plywood laminate skin. The La-5 was very much a kludge job, basically a Lagg-3 fighter with a powerful radial engine grafted to the front. But it worked, and worked well. The La-5 made an immediate impact when it appeared in the skies over Stalingrad in 1942, and became the mount of many Soviet aces.

The La-5 I’m building is the product of up-and-coming Russian kitmaker Zvezda. They’ve been around for years as something of an also-ran, but they’ve recently stepped up their game, first with the La-5FN and La-5, and most recently with a ridiculously over-engineered Messerschmitt Bf-109F-2 that’s quickly gaining a fearsome reputation.

The Zvezda La-5 is no slouch when it comes to engineering complexity. The kit basically requires that you build a good portion of the aircraft’s internal structure, and as such has an assembly sequence unlike anything I’ve encountered. It’s the kind of kit that really forces you to pay attention, but rewards that attention with great fits all around. 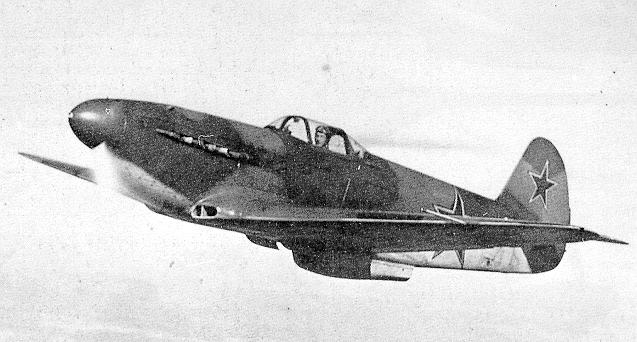 The Yak-3 is another of the Soviets’ wooden wonders, developed off the earlier Yak-1, Yak-7, and Yak-9. This little fighter proved so fearsome when it was introduced that Luftwaffe leadership basically sent around memos saying “stay the hell away from the Yak-3”.

Eduard’s Yak-3 is a re-issue of molds dating back to their own also-ran days. It certainly doesn’t measure up to the newer Eduard kits such as the F6F Hellcat and Fw-190, but it’s surprisingly competent and builds up quickly.

At the time of this writing, principal construction on both planes is complete, with the La-5 awaiting sanding and filling, and the Yak-3 ready for primer.

What’s on deck after these are done? Here’s a little teaser.