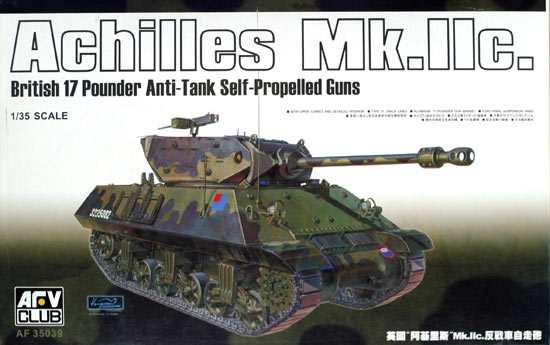 After Tamiya’s M4 Sherman Early Production, I was itching to dig into another armor build, but my stash presented me with too many interesting choices. To help things along, I took the decision out of my hands and opened it up to a poll. Well, the results are in, and the Achilles crushed the competition with 40% of the votes.

The Achilles was based on the U.S. M10 Tank Destroyer, itself based on the same VVSS chassis that underpinned the Sherman tank. When the Brits got their hands on the M10, they swapped its armament for their 17-pound gun, the same one they used to outfit their Sherman Firefly tanks.

While the Achilles and its gun packed a hell of a punch, the thinner armor and exposed turret left them quite vulnerable to German tanks. Still…the thing looks fearsome, and with its open turret, should provide both a nightmare of masking and lots of opportunity for detailing.

Keep an eye out for the build reports!