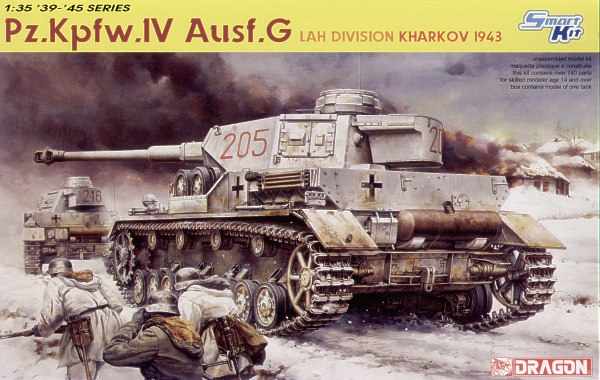 After two back-to-back allied builds – Tamiya’s M4 Sherman Early Production and AFV Club’s Achilles Mk.IIc – I’ve decided to leap across the lines and build some German armor for a change.

There are so many German armored vehicles to choose from that it’s somewhat ridiculous, but I’ve settled on Dragon’s Panzer IV Ausf.G. The Panzer IV was Germany’s most numerous tank, and it’s always struck me as looking exactly as a tank ought to look. I realize that probably makes exactly zero sense, but there you have it.

The Official Tank of War Criminals

I have to admit up front – I don’t fetishize German armor. If anything, my heart lies with the M4 Sherman, and other VVSS and HVSS-based vehicles. In fact, I’m actually somewhat unsettled at the popularity of German armor in the market. Yes, the Germans built some fantastic hardware, and tended toward far more imaginative paint schemes than their allied opponents, but they were still the aggressors. They were still the bad guys.

Now…I don’t think all Germans were evil Nazi bastards. I don’t even think most of them were. It’s just not that black and white. And the idea of building a tank from, say, the Afrika Korps doesn’t really phase me all that much. Building a Panzer IV from the 1st SS Panzer Division, the Leibstandarte SS Adolf Hitler? Well, that’s something else altogether.

After the war, members of the LSSAH were tried and convicted for war crimes at Nuremberg. Among their crimes include the murder of at least 5,000 prisoners of war from 1940-1945. While the LSSAH fought heroically on the Eastern Front, and proved instrumental in recapturing Kharkov in the spring of 1943, they sullied their accomplishment by proceeding to slaughter several hundred wounded Soviet prisoners housed in the city’s main hospital.

I don’t think anything can cleanse that kind of atrocity. However, it does have to be taken in context. While the war on the Western Front was often desperate and brutal, it was a gentleman’s war in comparison with the Ostfront, which was basically one long, extended atrocity. Both the Germans and Soviets regularly engaged in terrible crimes, and while that doesn’t excuse the actions of the LSSAH, it does, I think, throw a light on the fact that the east was a different war, and that standards of conduct were, on both sides, often just chucked out the window.

I’m also personally hesitant to hurl accusations of war crimes against individual soldiers on the ground. As we’ve seen in our own history, battle rage and a group mentality can lead to bad places. And when the other side is regularly visiting atrocities upon your friends and fellow soldiers, well, I don’t think it’s quite so simple to whitewash the entire German military, or even those engaged on the Eastern Front, as evil.

I broke into the kit last night, and so far, it’s interesting! Definitely a bit fussy, with lots of very small parts, but everything fits together way better than the AFV Club Achilles. Look for a build report soon!