Prior to starting this build, I’d heard plenty of horror stories about Dragon’s abysmal directions and fussy construction.

Honestly, I haven’t seen it. The instructions aren’t perfect, and actually get part numbers wrong in a few places (and give you various options in some steps, but never correspond those options to any of the specific tanks for which the markings are provided). And the construction is somewhat fussy.

But after building AFV Club’s Achilles, this kit feels like what AFV Club was aiming for, but failed to reach. The instructions are no worse than those for the Achilles, and actually provide better and more consistent paint call-outs. And the assembly is in a whole different league. While both involve lots of fiddly bits, those of the Panzer ACTUALLY FIT.

As I didn’t find any real gotchas and didn’t run into any issues with the build, I won’t belabor it. Suffice to say, it builds like most armor. Starts with the lower hull and running gear, and works up, finishing with the turret.

The final steps in the construction, adding small details here, there, and everywhere, really drag, since it’s difficult to see the progress the way you do when you bring the hull together or attach the main gun. But it all comes together and looks pretty darn cool. 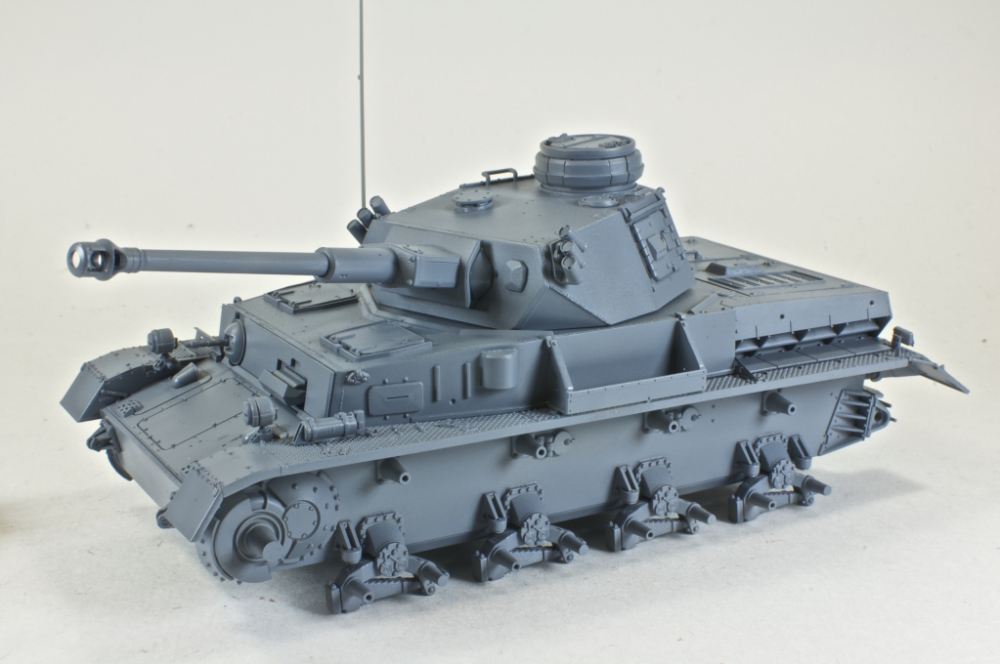 I LOVE these things.

The cleanup – drilling out holes and filing off burrs – is the epitome of tedium.

Assembly is nowhere near as bad as I’d heard. After reading of people assembling jigs to put these things together, and having all kinds of difficulties with threading the wire, I had none.

I started on one side first, assembling four links at a time, the assembling the fours into eights, sixteens and so on.

I connected the links with short lengths of .020″ brass rod. An excellent tutorial I’d read recommended this over the metal wire included with the tracks, but I found the rod harder to insert and thick enough that it dinged the track movement somewhat. On the other side, I switched to the metal wire with no problems, and assembly probably went four times as fast.

On my first go, I found the tracks way too lose, so I removed three. Suddenly they were taut.

I went back and added two links back, and came away with the slight sag more commonly seen on Panzer IVs.

After the horror that was the AFV Club kit, the Dragon Pz.Kpfw IV has proven a pleasure to build. I have to admit, I was a bit concerned about my growing stash of Dragon kits (two Fireflies, two Tigers, two Panzer IIIs, a Panzer II, a King Tiger, and an M7 Priest…), but after this build, I’m looking forward to all of them!