Is it possible to be a modeling adrenaline junkie?

It seems that, after coming back to the hobby last year, I’ve been hurling myself at challenge after challenge, barreling right into situations that used to intimidate the bejesus out of me. In the last six months alone, I’ve tackled my first open-turret armor, my first winter whitewash, and my first biplane, complete with woodgrain and rigging.

Now, I’m tackling my first over-$100 kit, and one that many one call one of the best, if not the best, kits ever stuffed into a box.

So let’s get on with it!

The Spitfire’s cockpit is a pretty epic build in and of itself. I’m pretty sure it alone contains more parts than the whole of the 1/48 Mustang that’s sharing the bench. I mean, the control column assembly is four pieces by itself! Add Eduard’s fabulous photo-etch interior set and a Barracudacast resin seat to the mix, and the cockpit becomes an extended build in its own right.

After filing down the surfaces that needed filing to accomodate various PE elements, I primed all the parts with Tamiya AS-12 bare-metal silver, then airbrushed the proper areas with Model Master RAF Interior Green. Next the PE started to go on (easy enough at this size, but complicated by Eduard’s annoying self-adhesive concept…backing paper and adhesives make removing parts from the fret rather frustrating). The instrument panel is, hands down, the nicest I’ve ever seen in PE.

While I was at it, I painted the Barracudacast resin seat in a rusty brown combination of Tamiya paints to represent the unpainted Bakelite material the Spitfire seats were made of (I realize it wasn’t Bakelite, but a similar resin formulation, but Bakelite sounds better). The leather padding is a matter of some controversy. I’ve seen it both in natural leather brown, and in black. I opted for black to provide some visual contrast.

Next, details were painted, seatbelts added, and everything weathered with a combination of drybrushing (Floquil Old Silver) and oil washing (Raw Umber thinned with Mona Lisa Odorless Spirits). The major subsections of the cockpit fit together amazingly well, stacking into the “floor” before being sandwiched in place by the sidewall detail.

One thing I love about Tamiya kits is how they can often as not hold themselves together. With, say, Eduard, everything has to be glued down. But with Tamiya, you can add up multiple subassemblies, dry-fit them, and have them stay in place. Love it.

Once everything was locked down and the shoulder belts of the sutton harness added, the cockpit was done.

Once it came time to sandwich the cockpit assembly within the fuselage, I discovered my first and so far only area of disappointment with the kit – the lights. Here’s how it works. Tamiya leaves an indention about 1/4″ in diameter, which you must drill through to make a hole. You then mount the lens from the inside, and the glass from the outside. What sucks here? First, the light on the underside of the fuselage lies directly on the join line, making it difficult to get a clean hole. But…at that kind of size, you’re also moving up into big, coarse drill bits that don’t leave perfect, smooth holes in plastic.

But more frustrating than that…why not just leave an opening there to begin with? Navigation lights were a universal thing, and if they had for some reason to be filled, well, Tamiya includes plenty of other holes in the wings with pieces designed to drop right into place with surgical precision. So why not just do that? Drilling holes that large just seems unnecessary.

Apart from the light holes, the Spit builds up beautifully. The control surfaces are all workable, moving thanks to metal shafts with PE hinges sandwiched between the elevator/rudder/aileron halves. They are a bit too flappy for my taste, and I will probably just glue them into one solid position, but it’s a great approach.

The wings are works of art, and the fit of various panels (that you can and should glue into place from the inside while you can) is the best I’ve ever seen on any kit, ever. Drop them in, tack them with some solvent from the inside, and you’d have no idea they were separate parts.

The wing links up with the fuselage rather well, too, and leaves you enough room both front and back to tack critical portions of the wing root/fuselage join from, once again, the interior of the kit, reducing mess and thus cleanup.

There’s still a ways to go on the build-up, but this is such an epic kit, I figured I’d best jump in here, with the major airframe components in place, rather than try to incorporate the rest of the build-up phase into a ridiculously massive post. 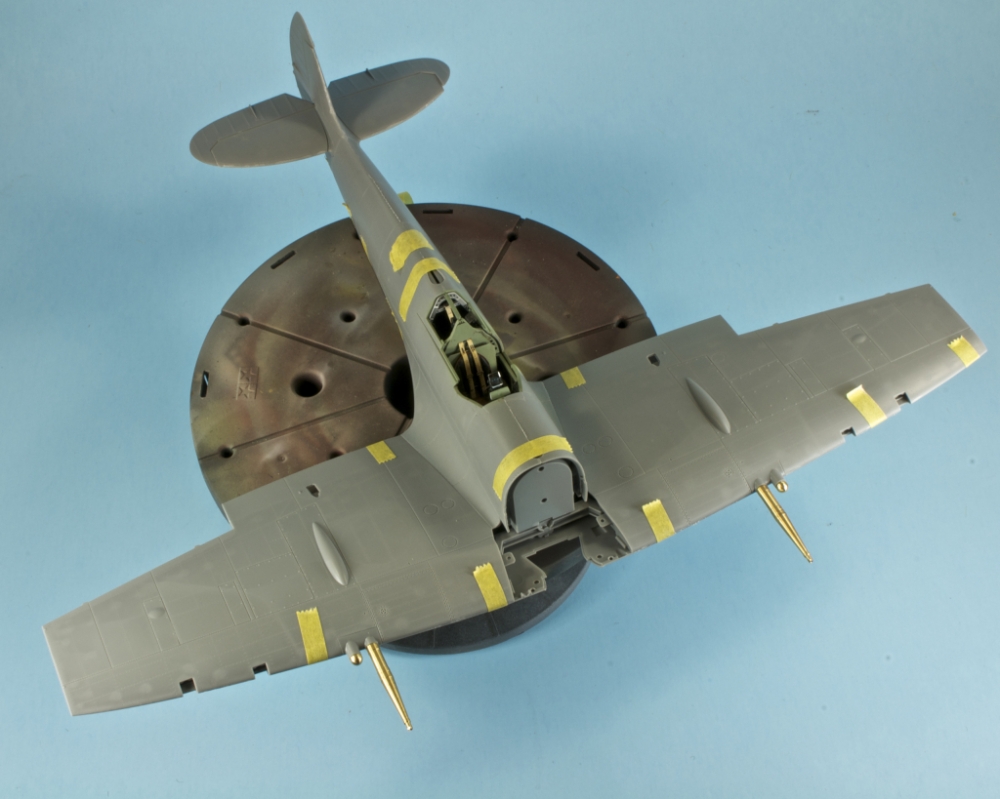 Yes, this kit is expensive.

It is also, hands down, the single most impressive kit I have ever touched. Everything about it exudes passion, from the detail accuracy to the crazy-clever engineering to the impeccable fit.

At this point, I’m having an absolute blast with this build. And if you can look past the price, I strongly recommend picking this or one of the other Tamiya Spits up. In my opinion, they earn every penny.