It feels like it’s been a long time coming, but the big Spitfire Mk.VIII is finally going under the airbrush.

Building kits in the garage, in Texas, during the height of summer introduces some serious environmental challenges. Obviously the heat, and the fact that even the slight effort of masking a wing or sanding Panzer wheels can leave you dripping with sweat in under ten minutes. Beyond the discomfort, however, the heat also messes with paint. Specifically, I’ve been having ridiculous problems with paints “dusting” as they come out of the airbrush, forming nasty, rough patches on the model. It happened with my Sopwith Pup. It happened with the Krylon gloss black I tried to use on the Mustang. And it’s been happening with everything I’ve thrown at the Spitfire. My solution so far has been a bit of a two-parter.

First, I’ve switched the main colors up to enamels. They tend to be more forgiving in application and less prone to dusting in general.

Second, I’ve been polishing with Micro Mesh polishing cloths. These do a great job of knocking down rough spots, but I have yet to try them on enamel paint and am a bit worried. In the past, attempts to sand enamels have left a lighter, chalky residue. Hopefully by dry and not wet sanding I can avoid this or leave it easily removable. We’ll see!

I kicked things off by priming the Spitfire with Gunze-Sangyo Mr. Surfacer 1200 sprayed through my Harder & Steenbeck Evolution. In some areas, it went down perfectly smooth. In others, it dusted pretty badly. Micro Mesh to the rescue!

After the primer, I sprayed the wing stripes with Model Master Deep Yellow (Insignia Yellow seems far too “lemon yellow” in my opinion), then masked them off with two strips of tape cut to match the width of the Tamiya decals.

When I was ready to paint the underside, I pulled out my Guzne Mr. Color Azure Blue and found it to be far more lavender/violet than any Azure Blue I’ve ever seen. So I picked up a bottle of Model Master RAF Azure Blue instead. 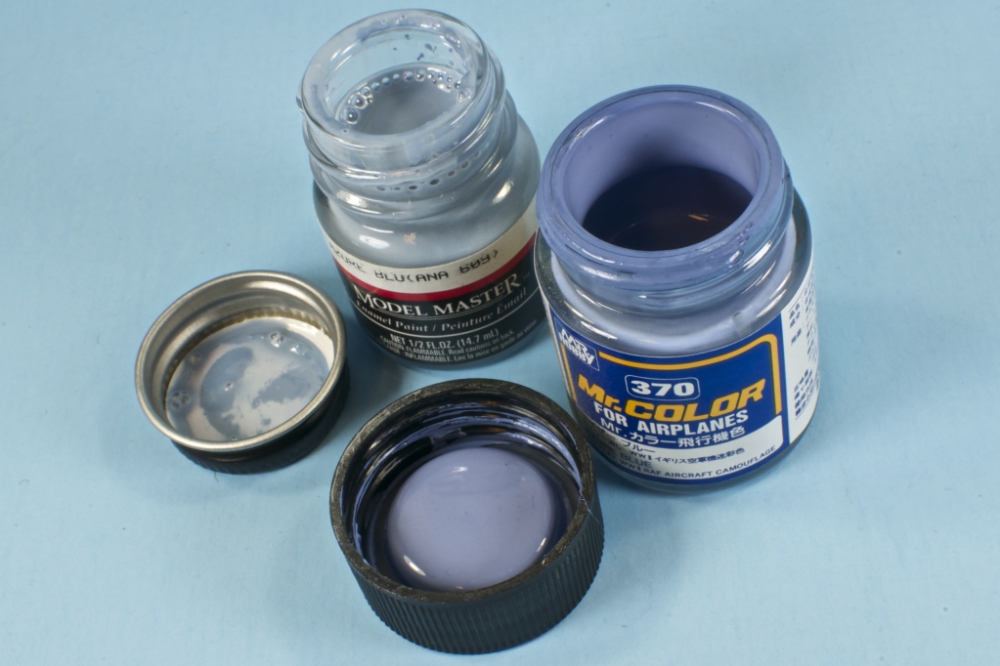 I sprayed this on using the “three-layer blend” technique, rather than dealing with tedious and difficult-to-control preshading.

After giving the Azure Blue a few days to cure, I masked off the underside with a combination of Tamiya tape and post-it notes, and moved on to the upper surfaces.

The first color to go on – RAF Middle Stone. Again, I used the three-layer blend to add depth and character to the finish.

Once the Middle Stone had a few days to cure, I started the tedious task of masking the wings and fuselage to apply the Spitfire’s distinctive disruption camoflage. Unlike most Spitfires, which sported hard-edged camoflage, Molland’s “Fargo Express” shows tight, hand-sprayed lines, indicating it probably got repainted along the way. Typically for soft-edged camoflage, I’ll use white tack poster putty or silly putty, but this particular aircraft also has large Middle Stone “blanks” where the RAF roundels were overpainted. Try masking those with silly putty.

After some initial attempts, I gave up and freehanded the basic patterns.

Then I came back through with tracing paper and some discs cut to the size of the RAF roundels, used these to mask, and sprayed in the three layer blend. The result? A not-quite-but-almost hard edge, exactly what I was going for. When I pulled all the masking off, I was pretty floored at how it seems to be coming along!

Coming up next, decals and details…stay tuned!