eBay is a great way to score kits on the cheap, if you’re patient and if you can restrain that “I’ve been outbid…this means war!” impulse.

But I try to avoid it because the site’s a damn rabbit hole.

Allow me to present Exhibit A.

I’ve been trying to run down Hasegawa’s 1/48 AU-1 Corsair for months now. For those of you not familiar with the AU-1, it was a dedicated ground attack version of the Corsair built for the Marines during the Korean War. I believe it’s interchangeably known as the F4U-6, but that’s neither here nor there. Basically, in included modifications to make it more survivable in its newfound role of close air suport.

It also departed drastically from the traditional sea blue scheme worn by pretty much all Corsairs from 1944 on: 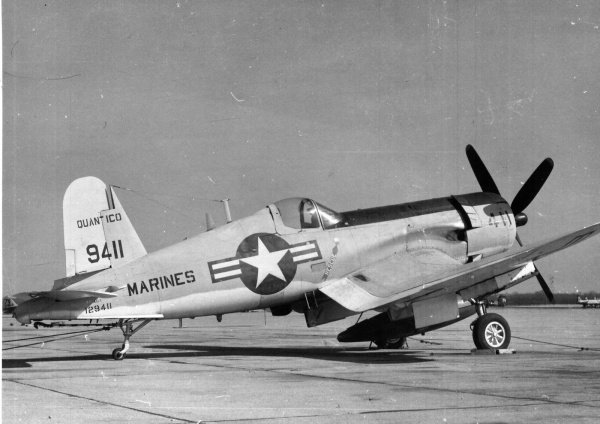 It’s so cool and so strange to see the Corsair duded up in the high-visibility scheme, and once I learned Hasegawa had actually made a kit of this thing, I was determined to find one.

It’s been hard. I’ve had a few slip through my grasp in the last minutes of auctions. So I’ve set up an eBay alert to tell me whenever another one pops up.

Well, one popped up last night. So I went in and placed my bid. Hoped for the best. Then, while I was there, I figured I’d look around, just in case anything else promising was floating around.

Next thing I knew, I was bidding on two other kits. Both 1/32 scale, and both for substantially less than you’d pay to get them new. One auction just ended tonight, and I’m the winner of a Trumpeter F4U-4 Corsair for a whopping $30. Not bad, considering I’ve never seen one on sale for less than $60, and usually closer to $75.

I can’t really complain. The F4U-4 is my favorite Corsair, and probably my favorite plane overall, save for the P-47. So I’m thrilled to have the four-bladed beast in 1/32 scale.

But still, I think I need to stay away from eBay for awhile!

UPDATE 2: I won the AU-1! And for only $32 – a steal next to where I’ve seen auctions for it go in the past. I’ve also received the F4U-4, which, my fault for not reading the fine print, but was actually started (and poorly). Sigh.