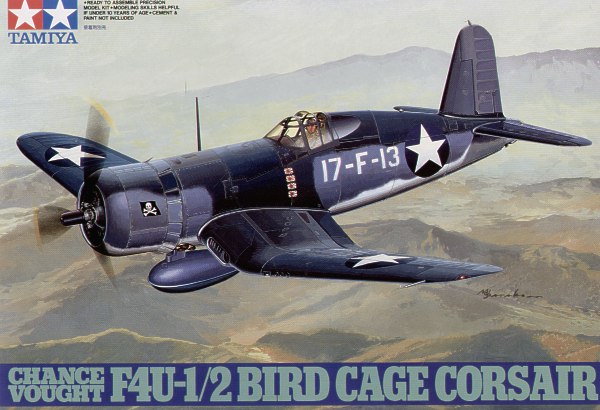 There are exactly three aircraft for which I am determined to build an example of every major variant. The first is the Republic P-47 Thunderbolt. The second, the North American P-51 Mustang. The third is the Chance-Vought F4U Corsair.

Originally intended to replace the Grumman F4F Wildcat, the Corsair ran into problems securing clearance for carrier operations due to poor visibility and a tendency to hop when landing. This relegated the Corsair to land bases into 1944 and gave the Grumman F6F Hellcat the opening to take the mantle as the Navy’s frontline fighter for pretty much the rest of World War II. But…the Corsair was still a superb aircraft, a match or better for the Hellcat, and it’s telling that, late in the war, it was the Corsair that was being rapidly upgraded to counter the kamikaze threat, not the Hellcat.

In the end, the Corsair would have the last laugh, finding ongoing value as not only a fighter, but a strike and close air support aircraft. In these capacities, it served through the duration of the Korean War, while the Navy’s Hellcats had long since been scrapped.

The first Corsair to enter frontline service was the F4U-1, often called the “birdcage” due to its caged canopy, which was replaced with a clear Malcolm hood from the F4U-1A onward. While later Corsairs tended to wear either tricolor or dark sea blue camoflage, these earliest Corsairs often wore the Blue Gray over Light Gray livery more commonly associated with early war aircraft, giving them a very distinctive appearance from their later variants.

To be honest, I’d kind of been dreading the F4U-1, as it seems so far away from my favorite Corsair variant, the four-bladed F4U-4. But then Barracudacals went and printed a decal sheet that included a hard-ridden, ridiculously weathered -1 wearing the inscription “Tojo Eats Shit!”. I knew at once that, when I build the birdcage, that’s the one I’m building.

To give you a sense of just how weathered this plane was…here’s an actual shot.