When I came back to modeling in July 2010, I put my bench together with two folding tables bought on the cheap and whatever spare bits I could scrounge together. I mean…I made a paint rack out of unused shelves, PVC tees and Diet Dr. Pepper cans! And a light mount out of an unused desk hutch, a few lengths of wood, a bungee cord and some chains jacked from some hanging plant baskets.

With the move, it’s been my intention to rethink some things and put together a better, more functional bench. Bench Mk.II.

A few of the improvements I plan to make incude:

Better “benches”. The Costco folding tables served their purpose, and they were cheap – an important consideration when, at the time, I wasn’t sure I’d stick with the hobby. But…they’re built in a way that nothing can really be rolled beneath them. And they’re LOW. At just 29″ high, they’re a back-arching, knee-banging pain. So I’ll be replacing them with two of these Gladiator Cadet 66″ workbenches. 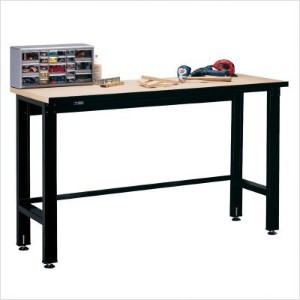 What will become of the old Costco tables? One will be repurposed as the dedicated photo bench. The other will be folded up and held in reserve for projects requiring big storage (such as, say, a certain battleship).

Under-Bench Storage. With the new benches, I’ll finally be able to roll storage underneath. My cheap plastic rolling drawer/cart thing from Target will go under the bench, able to roll out as needed. I’m also adding a Gladiator Cadet 5-drawer rolling cabinet for storing pigments, oils, pointy-things and other supplies.

I’m also thinking about adding a slide-out keyboard tray under one or both desks for quick access to oft-used supplies – xactos, tweezers and such. But I haven’t made up my mind just yet.

Shelving. Bench Mk.I utilized some repurposed Elfa shelving. Bench Mk. II will add more. Some over the bench for more at-hand supply storage, and some surrounding for kit storage. Elfa also makes some little wire baskets that work with their shelving system. I’ll be using those as a paint rack, most likely, but I may need to modify them a bit to work the way I want (hello Dremel cut-off wheel!).

Progress since the move has been halting, interrupted by everyone in the family getting sick, by the need to get the old house ready to list, and by the need to unpack the rest of the house, too. But things are moving forward, slowly but surely, and I’m still hoping to be ready to commence flight operations starting around Thanksgiving.

That’s about where things stand. The new benches arrive next week – once they’re in place things should really start to ramp up! Stay tuned…