What can I say about the P-47 that hasn’t already been said? It’s my favorite plane. It’s a bruiser of an aircraft, with eight .50 cal machine guns and  a staggering capacity for absorbing damage and staying in the air.

It’s been too long since I’ve built a Jug, so how better to make up for it than by building two?

Expect lots of olive drab. And double entendres that would make James Bond roll his eyes.

The Tamiya Kit and “Magic Carpet”

First up is Tamiya’s 1/48 Razorback. I’ve built Tamiya’s Bubbeltop, and it remains one of the best kits I’ve ever built. I’m looking forward to seeing whether the same holds true of the humpback.

The Tamiya Jug will be finished in the striking livery of Lt. Colonel Harold Holt’s “Magic Carpet” of the 390th Fighter Squadron, 366th Fighter Group, 9th Air Force. On January 1, 1945, green pilot Bob Brulle flew his boss’ ride off the primitive runway Y-29 near Asche, Belgium, when the Luftwaffe descended. Operation Bodenplatte, a daring (and foolhardy) plan to disrupt Allied air superiority during the Battle of the Bulge, was underway. Brulle, along with the rest of the 390th, as well as P-51s from the 352nd Fighter Group, engaged in an intense, low-altitude furball that ultimately shattered the German thrust at Y-29. The History Channel’s Dogfights did an excellent episode called “The Legend of Y-29” that tells the story…you can find it pretty easily on Netflix or even YouTube.

The Revellogram Kit and “The Bug”

The Revellogram kit (Monogram molds, now sold as a Revell), for me, is a chance to make up for the disaster that befell a Monogram bubbletop I took on in the fall of 2010. I messed around with a lot of ways to improve that old kit, only to lose it to terrible decals and the efforts to remove them. Fingers crossed, the Razorback won’t meet the same fate.

The Revellogram kit will be finished in the livery of “The Bug”, flown by Captain Arlie Blood of the 510th FS/405th FG/9th Air Force. Blood’s career was a rollicking one, including two bail outs where he was too low for his chute to open properly, a time with the French Resistance, and a narrow escape from a Nazi firing squad. 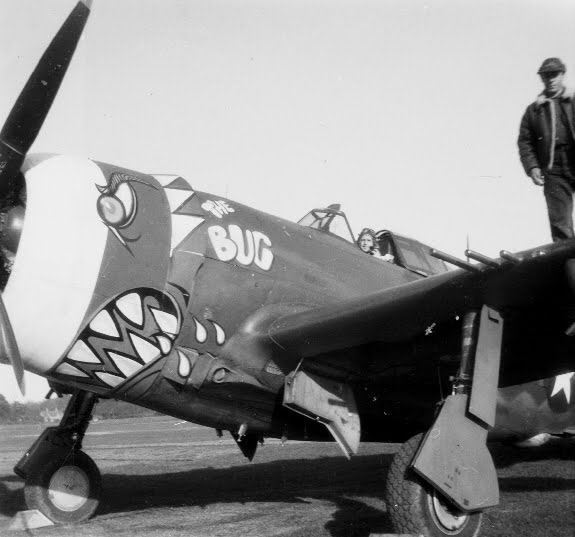 Both “Magic Carpet” and “The Bug” represent P-47s of the 9th Air Force, renowned more for their devastating close air support than dogfighting the Luftwaffe.

I spent the first night at the bench clearing away the detritus from my last builds, prepping parts for priming, and doing some initial test fittings.

The first immediate difference in the kits is the complexity involved.

The Revellogram is exactly as simple as its Bubbletop sister…the entire canopy tub is on piece, save the control stick and instrument panel. The wings consist of a top and bottom – the bomb racks are already molded on. Still, detail is overall not too shabby with a few exceptions (notably the sad excuses for blast tubes). The Tamiya, likewise, shares a lot with it’s Bubbletop version, with the major difference being the fuselage and, well, pretty much nothing else. The same absurd number of options and spares carry over.

Test fitting the major airframe components revealed no surprises from the Tamiya. Everything is tight and assured. So much so that I may be able to get away without applying solvent to the wing roots with some careful sanding.

The Revell kit…I must admit…surprised me. With the bubbletop, the wing fit wasn’t bad, but it did leave an awful gap at the wingroot that had to be filled by strip styrene. And the horizontal stabilizers drooped something fierce. This time around, things are much better. The wingroot gap is totally manageable, and the light gray styrene is a welcome change from the swirly silvery stuff that I guess was all the rage when my copy of the bubbletop was boxed in 1993.

Tomorrow cockpit prep starts, and I’m hoping to get to work replacing the terrible styrene rod excuses for blast tubes on the Revell.