When I kicked this project off, I had every intention of going with Hasegawa’s 1/32 Jug. Until I pulled it out of the box and began fiddling with it. I’ll address why I soured on it below, but suffice to say I’ve decided to build C9*I of Groupe de Chasse I/5 “Champagne” with Trumpeter’s big P-47 instead.

I was really looking forward to Hasegawa’s 1/32 P-47. The kit’s been the subject of numerous glowing reviews, and I went in with high expectations. Perhaps too high. Maybe it’s some of the other kits I’ve plowed through recently. Maybe it’s because I’ve built Tamiya’s masterful 1/48 P-47 (twice) and was hoping for something along the same lines, but bigger. What I encountered instead was a letdown, simple as that, from the floppy wing spars to the ill-fitting cowl idiotically divided into four pieces. If dividing the cowl was done in the name of displaying it with various access panels removed, I’d have been okay. But it’s not. It’s just…quartered for no reason.

I decided to pull the plug on the Hasegawa as soon as my dissatisfaction set in – I’ve learned better than to plow on with a kit when my first impression is so negative. Instead, I picked up Trumpeter’s big P-47D-25.

Initial impression? This is a far more ambitious kit than the Hasegawa…and while it features some questionable engineering choices, the main airframe buildup is, in my opinion, a lot smarter. For starters, there’s no four-piece cowl silliness. While the choice to make it clear is kind of random, it’s one piece, it’s gorgeous, and it fits without an annoying step.

The wing spar is also far beefier than in the Hasegawa kit – and is actually more reminiscent of the 1/48 Tamiya Jug. Like that smaller kit, it locks the wings in place with absolute authority.

Another interesting bit is the interior ductwork. Every review of the Trumpeter Jug I’ve read has basically shaken its head at this, with good reason – it’s beyond silly to include a complicated assembly that gets trapped inside the fuselage where it’s completely invisible. Those same reviews have also noted that it’s required, because the cockpit tub rests on it, as does the firewall that ultimately helps mount the engine. I’m happy to report that  these are both LIES.

The cockpit tub sits happily on four little spars that jut out from the inner fuselage walls.

As for the firewall, it attaches to the forward wing spar, which only kinda rests on the ductwork and is actually trapped instead by the fuselage halves themselves.

First thing’s first, and since this is an aircraft, the first thing is the cockpit. If you’ve built Tamiya’s Jug before, the layout is instantly familiar.The cockpit itself is solid enough, but I decided to go a bit deeper and use Eduard’s interior detail set.

A lot of the good stuff’s in color, but I went ahead and laid down the unpainted photo etch first.

By the way, yes, that’s a photo-etch seat. Big improvement over the kit plastic, if you ask me.

Once everything was as in place as it could be, I primed it with Gunze Mr. Surfacer 1200, then airbrushed it Tamiya XF-1 Black oversprayed with XF-16 Deep Green to give it some depth.

Next up, the seatbelts. Trumpeter gives you some crappy photo etch belts. Eduard’s detail set gives you much nicer color PE belts. But I’m a total convert to microtextiles, so on to HGW’s P-47 harness!

Here they are after assembly:

And after a wash of raw umber artist oil. The shoulder straps of Radu Brinzan’s Luftwaffe belts came along for the ride for the sake of comparison.

With the belts done, I shifted gears to the instrument panel. The panel facing is a bit too blue and gray for my taste, but it’ll look good enough once it’s all closed up. 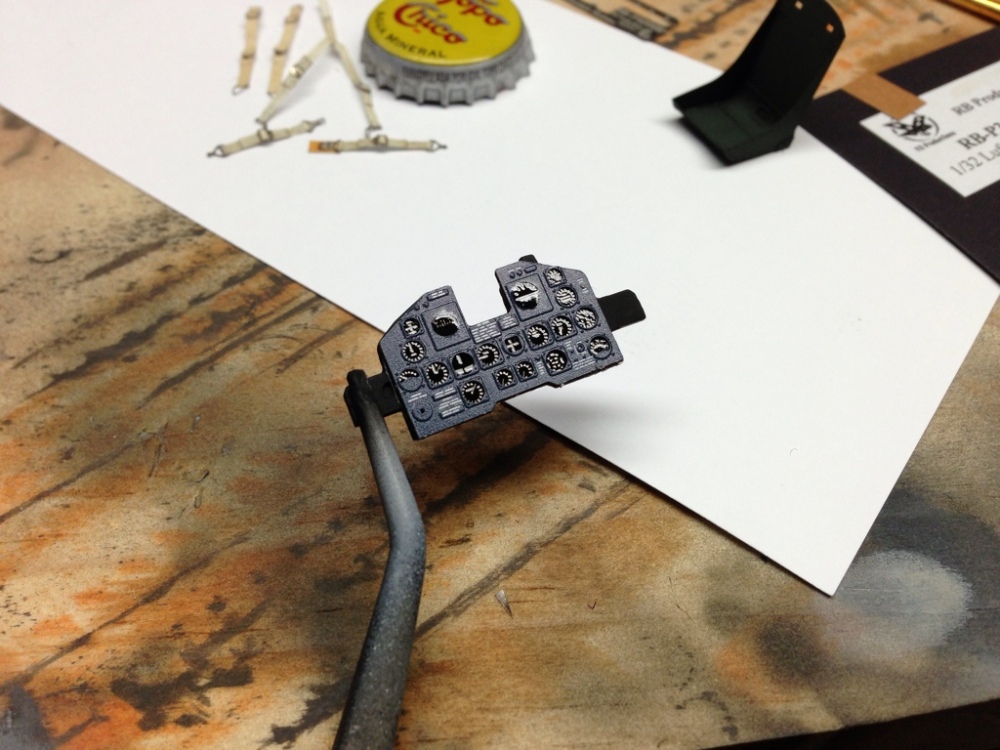 Next, the general weathering progress…drybrushing the cockpit with Model Master Dunkelgrau and some Metalizer Aluminum, applying the color photo etch, and putting down a raw umber oil wash.

Being a fairly detailed cockpit, there’s a lot of little work that needs to happen for it to come together. Here’s some in-progress shots with the oxygen hose mounted, seat installed, HGW harnesses fitted in place, and the instrument panel and rudder assembly kind of leaning in place. The P-47 didn’t have combing over the instrument panel. Considering the backside of the instrument panel will thus be somewhat visible through the windscreen, I’ve added some wiring to busy it up. 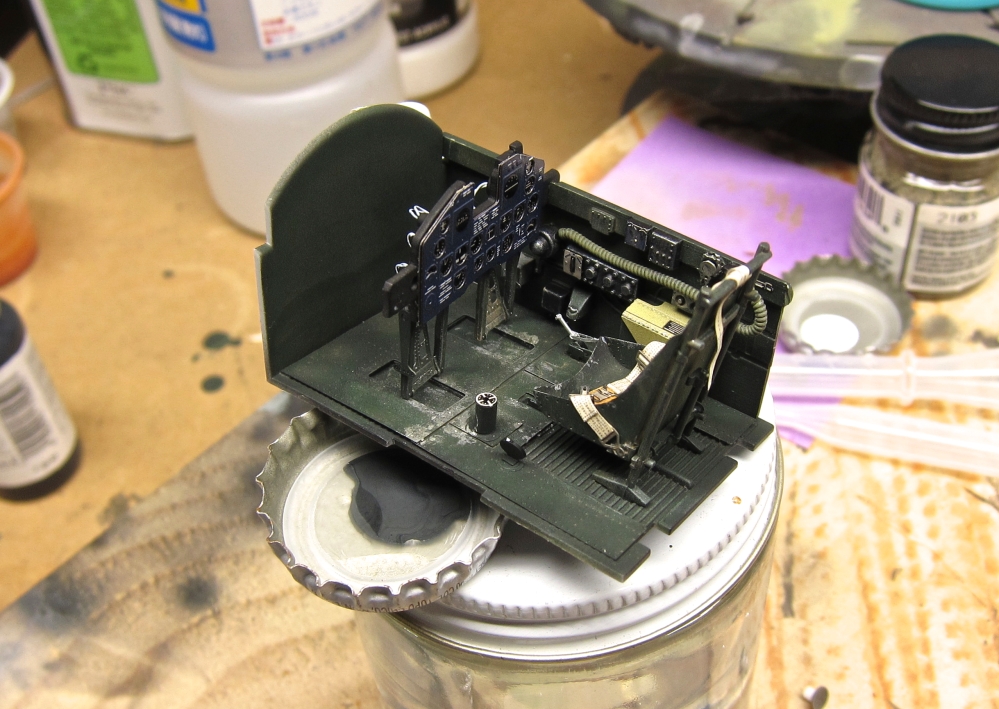 While waiting for the seat, then the harnesses to set, I also did some work on the Mk.VIII gunsight. I wasn’t particularly impressed with the Trumpeter rendition, which seems vastly oversized, so I ordered a resin replacement from Master Detail. This was attached to a photo etch mounting truss from the Eduard detail set.

There was some folding involved, but honestly the truss was pretty easy to get sorted. Just some very easy folding, really. The pics I have of the real thing show it all dusty (sort of like the area behind a TV), with wiring running along it and back down behind the instrument panel. It’s going to be fun to really detail it up! But first thing’s first, primer and paint. In this case Tamiya rattlecan primer and Vallejo Black.

Once the Mk.VIII was painted up, the rest of the cockpit went – I won’t say quickly, but it went more or less smoothly.

The gunsight and mount were lightly drybrushed with silver, the forward padding painted Vallejo Leather Brown, and the general dirtiness of the mounting truss achieved with AK Interactive Dust Effects. Some Ultrawire was twisted up and hit with Tamiya primer, then installed. Finally, the reflector glass was punched out of the provided acetate sheet and installed with Micro Kristal Klear glue.

A few additional photo-etch bits were added, as well.

Lastly, when I went to install the control stick, I noticed it was way, way too high. At basically shoulder-level with the pilot. So I sliced it down and used the removed length on the throttle quadrant.

From there, the rest was mostly putting pieces together. Gluing the gunsight and truss in place was interesting, but everything else was paint-by-numbers basic.

And with that, the cockpit it complete! 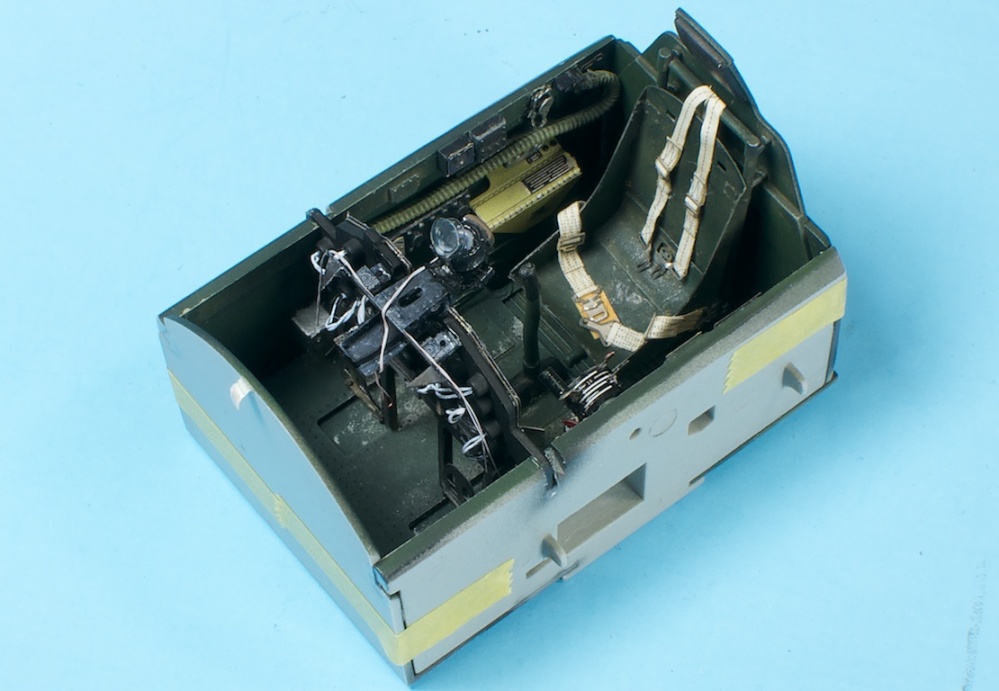 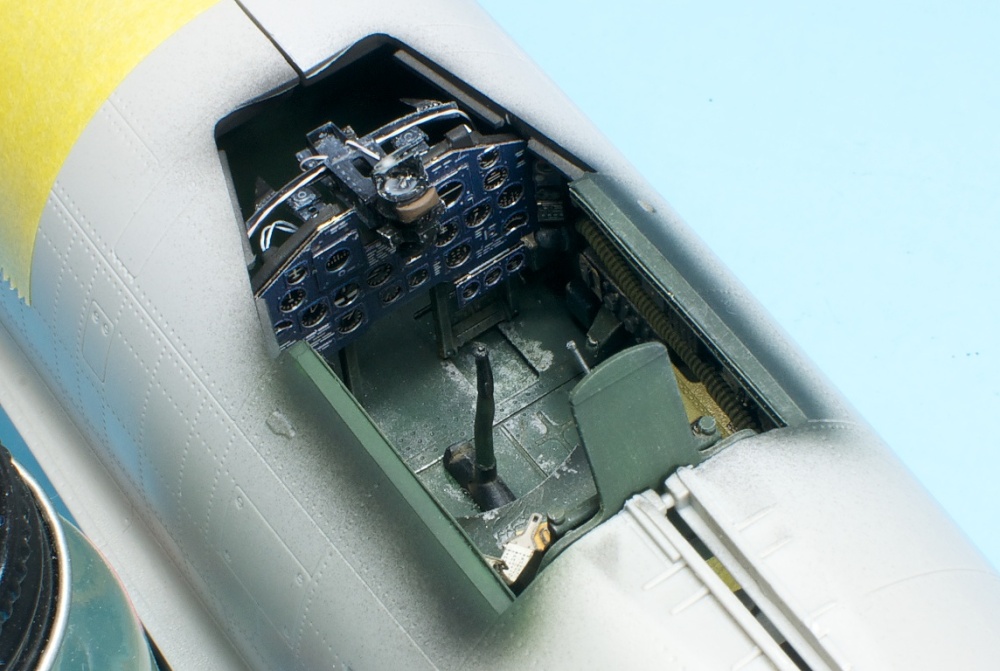