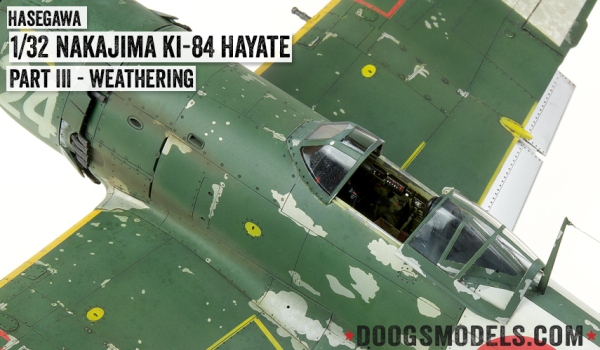 In Part I, the Frank got built up. In Part II, it got painted.

Now, it’s time to move into weathering and wrap-up.

I knew way back when I cracked the box that I wanted to subject this build to salt weathering. This is a process whereby you douse the kit in warm water (with some soap to break surface tension), cover it with salt from a salt grinder, blow it dry with a hairdryer, then go over with a very, very thin coat. The way I learned it and the way I go about it is two coats – the first a lighter grayish/tan. Then, with salt removed and reapplied, a darker, grimy color.

One freaky thing about salt fading is that, once you rinse the salt away, it fogs up. It happened to a downright ridiculous degree when I first tried this trick on my PV-1 Ventura, and to a far lesser extent here.

Midway through applying the second coat, I had an accident. Some of my dark, grimy coat sloshed out of my airbrush, and being mostly lacquer thinner, ate through paint and plastic, but not salt, leaving a nasty ruination of a hinomaru.

This necessitated some repairs.

And ultimately everything came out right, though the starboard hinomaru is substantially more weathered than the rest of the upper surfaces.

After the salt weathering was complete, I shot a coat of Gunze Semi Gloss, which knocked the salt fog away, then moved on to oil dot filtering to add still more complexity to the paint.

One day I will do a full tutorial on this technique (which I’ve come to love), but it essentially boils down to applying tiny dots of oil paint all over the aircraft, working them in with a brush dampened with thinner, then going back with a broad, dry brush and blending them in.

In this case, I used several oils – Raw Umber, Transparent White, Yellow Ochre, Green Bean Gray, Naples Yellow, and Prussian Green. The latter actually got a second application on top of everything, since I really like the depth it brought to the dark green.

While I was tackling the Hayate, I also did some oil streaks on the drop tanks.

After the oils went down, the Ki-84 got a few days’ reprieve, then a coat of Gunze GX100 Super Clear Gloss. This was the foundation for a sludge wash of Flory Dark Dirt and Black. which were then wiped clean. Painting was wrapped with a coat of Gunze Flat Clear,

Once the clear coat was down, it was mostly a race to the finish. Gear struts and gear doors and antenna rigging and placement of the wingtip lights.

51 days after picking up the first sprue, the Ki-84 came off the bench.