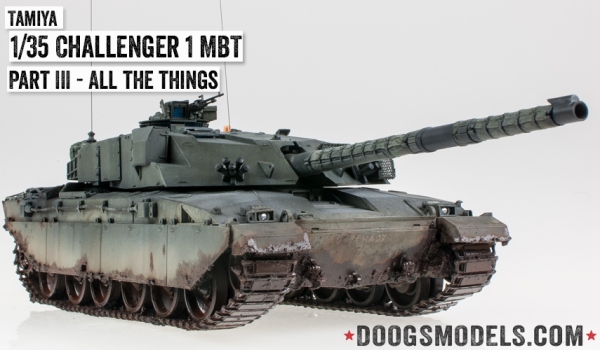 In Part 1, the Challenger itself got built and received it’s initial paintjob.

In Part 2, I shifted direction to work on the display base.

This Part 3 has been a long time coming, as the Challenger got sidelined for a time so I could focus on finishing off the Me 262A-2a.

In this build post, it’s all about the weathering, and making a second attempt at a display base. Read on!

After base-painting the Challenger, my next step was a drybrushing of Model Master Dunkelgrau to pop out the various textures and contours of the tank. I realize that drybrushing is definitely a bit “old school”, but I still find it effective, particularly for armor.

After the drybrushing, I hit the Challenger with gloss coat and applied the decals. For an old Tamiya kit, the decals performed respectably enough. Still…one of the things I really dig about armor. Not so many decals!

Usually, I go from decals right into oil washes on my armor builds, but since I wanted to roll out some oil dot filtering this time around, I decided to give Vallejo’s acrylic washes a try. After some good experiences on my Me 262, I found they performed rather well on the Challenger, too. They’re definitely going to be a larger part of my bag of tricks going forward.

I was particularly impressed with how well the washes did at defining the textures of the barrel’s thermal wrap.

First, the washes look a lot more opaque as they’re being applied, and go more transparent as they dry. So while you may think you overdid it, you probably didn’t.

Second, I’d recommend using the washes straight, rather than trying to dilute them with water (which I found could cause some tidemarking).

I’ve become a big fan of dot filtering on my latest builds, and the Challenger seemed an ideal candidate for it, with a very monotone finish needing to be broken up.

Sometime last year, I discovered a new (to me) line of oils that went beyond the usual raw umber / burnt sienna / yellow ochre with things various shades and permutations of gray, including cool gray, warm gray, green gray and the like. Using these in concert really ads a lot of visual interest without having to work overhard to cover up weird colors…

After the oils came AK’s Dust and Earth Effects. I’ve never had much luck with AK’s stuff before, but decided to buckle down and really figure it out this time around, and I’ve been having some better luck with it.

Side Skirts and Mud

My next step was to apply some MIG European Wet Mud, and then things went a bit sideways when I managed to slosh the front fender of the Challenger with mineral spirits from my brush-cleaning pot. Doh!

This led to some re-/additional weathering courtesy of AK’s Brown Wash for Green Vehicles. I further mucked up the forward deck and fenders by taking some Vallejo Black Wash, brushing it lightly onto a square of black packing foam, and dabbing it around.

After that, the side skirts were finally attached and “mudded” and the entire tank was flatcoated. I tried my good old Alclad Flat Clear, which reliably creates the deadest flat finish I’ve ever seen, and to my dismay found it dusting like mad. I ultimately had to reshoot some gloss, and then redid my efforts with some Vallejo Matt Varnish.

With the flat coat on, I transitioned into some final detail painting (lenses!) and pigments and mud. Here I used MIG’s Europe Dust and Russian Earth as my dust and dried mud, and Fresh Mud topped with Wet Effects as the sloppy stuff. Over MIG’s European Wet Mud, it really pops.

While the Challenger was getting into the weathering phases, I also came to the conclusion that I wasn’t happy with the first base. Overall, yes, but the way the celluclay had pulled the foam base up at the corners was just not okay. So…round two.

I decided this time around that I’d do the old picture frame-as-base thing, cut the foam “banks” to size, and matched them up with black posterboard outer borders.

Everything was glued down with wood glue, and it mostly worked.

Once the glue cured, I was able to slop down the celluclay that would cover the foam and create the base’s terrain.

As on the first go-round, the loose tracks from my Challenger Mk.3 kit were used to make the track indentations.

After giving the celluclay several days to cure, I painted it first black, and then with some more appropriate shades.

Again I used Woodland Scenics’ stuff as my base…it can be seen below on the left.

Mud followed the snow…this base layer being the MIG European Wet Mud mentioned earlier with the Challenger. The stuff is pretty great, if a bit on the dark side.

Snow and mud is nice and all, but the reference pic I’ve been working from also showed random tufts of dormant grass peeking through, so I decided to add some Silfur tufts of varying lengths.

These were a bit too “fresh” for my taste, so another coat of snow was added on top and then “slushed” with Future.

With the snow sorted, I came back around to the mud. Over on the build thread at Large Scale Modeller, GUY5Y pointed out that the mud should be a bit redder than the direction I’d been going, so I used some MIG Dark Mud pigment, topped with AK Interactive Wet Effects.

With the base sorted, and the tank sorted, all that remained was to put a few last pieces together – some stowage, the cupola ammo boxes and the like. And with that, I put a wrap on this project.

Overall, this build took a lot longer than I’d intended (and than it should have!), between waiting for the base to dry at various points, and getting sidelined at time for other projects. Still, I’m very happy to have built it…these old Tamiya kits are a nice break, and the weathering and base work were excellent practice for future projects.

Thanks for following along!