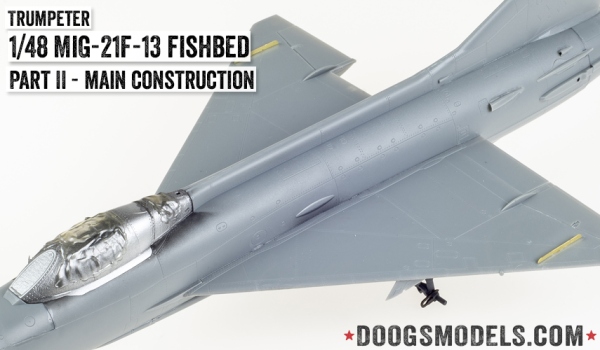 With the cockpit sorted, it’s time to move on to the build portion of the build.

Overall, Trumpeter’s kit is straight-forward and hiccup-free. Still, there are a few areas to watch out for, and it’s probably a good idea to have a sanding stick or five on hand.

Before construction can really begin, there are a few central bits that have to be sorted out. Namely the cockpit, engine, gear bays and the MiG-21’s distinctive shock cone. This cone can move forward and back, essentially regulating airflow into the jet engine. The MiG-21F-13 has a noticeably smaller shock cone than later Fishbeds such as the MiG-21MF and MiG-21bis, in large part because later variants placed the radar behind the cone.

For this particular build, the shock cone required some serious weathering.

Here’s how I tackled it.

First, I painted the thing in Alclad. Then, using some cool water cut with a bit of dish soap to kill the surface tension, I applied some ground salt. I’ve found I prefer the cool water, since warm water can cause the salt to dissolve, which can create weird ring effects if the water beads (which it likes to do for me).

On top of this, I shot some Gunze red onto the tip of the cone.

After giving the Gunze a few minutes to dry, I brushed away the salt with a toothbrush.

Next, I repeated the salt, and sprayed Gunze Bright Green.

The interior of the intake was also painted up with a bastard mix of Tamiya Interior Green and Deep Green.

Before closing things up properly, I also made sure I had enough weight up front to keep the nose on the ground. This was done by adding some Liquid Gravity into the back of the shock cone and smashing a lead fishing weight flat, then slotting it between the nose gear bay and the avionics plate.

I also took this chance to address the stabilators. One of the annoying bits of Trumpeter’s design is the decision to serve up the stabilator/fuselage join as a butt join, with no pins or slots or tabs of any kind.

Fortunately, Trumpeter did see fit to mold some drill-out points on the inside of the rear fuselage. I drilled these out, then used black paint and a toothpick to mark the corresponding drill points on the stabilators. This way I can install pins and mount the things up later in the build.

On to the Airframe

When it finally comes time to close up the fuselage, it closes up rather easily. The challenge, such as it is, is getting all of the internals arranged just so. I found the easiest way to do this was to apply glue to one side, then “trap” them, piece by piece, until the glue set. From that point, it’s just a matter of putting the fuselage halves together and going to work welding them together.

To point out two things about the above picture – first, you’ll notice that the nosegear strut is in place. There’s really no way around this with the way the kit goes together, so just be ready to mask/protect it throughout.

Second, you can see the two holes that represent the only hold points the wings have into the fuselage. This is, in my opinion, the most frustrating part of the build. Even tabs or something would be preferable.

It’s important to pay attention before you join the wing uppers and lowers. There are four holes that have to be opened up – three in the lower wings, and a small slit in each upper wing to accommodate the photo etched wing fences. I very nearly missed the last, and could easily see others missing it as well.

Once the wings are together, joining them to the fuselage is actually pretty simple. Yes, the hold points are ridiculous, but the wings actually line up very well with the fuselage, so gaps aren’t a problem.

To join the wings, I used a dot of superglue on each pin, then, holding the wings in place, ran MEK in a Touch-n-Flow along the wingroots.

Once the wings are on, the rest is easy. The tail is a perfect fit. The rear exhaust doesn’t exactly line up with the fusleage, but it’s a minor thing and I’ll probably leave it alone rather than try to fix it and destroy all the nice detail.

The biggest frustration comes from several of the small inserts, many of which need to be sanded to avoid standing proud of the fuselage surface. Just be ready for lots and lots of test fitting. Ultimately, though, it’s important to remember that these early MiGs in particular weren’t built to the most exacting tolerances, and on real life examples you see lots of sloppiness in areas like the cannon doors.

Since this MiG is going to be finished with the canopy closed, I went ahead and glued it down. Fit here was pretty good, too, and I used a combination of PVA glue and MEK solvent to fix the main and aft glass in place.

The wing control surfaces were added, save for the starboard flap, which is bare metal, and not camoflaged liked the rest of the aircraft. It will be painted separately and installed later.

Next up – time to fill and sand and get the MiG ready for paint. Then it’ll be on to the involved process of painting it up like White 2015.