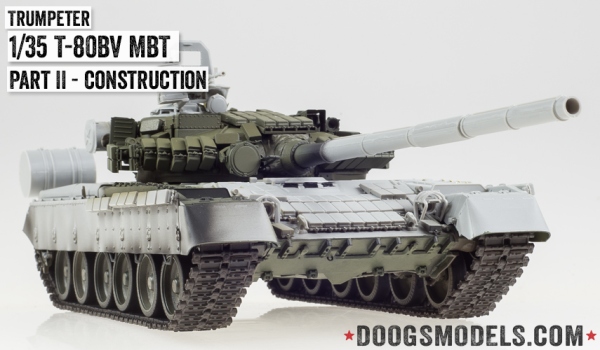 In Part 1, I tackled the tracks and running gear. This time around, it’s all about plowing through construction to get to the part I really enjoy – painting and weathering.

If you want the TL;DR version – this kit is a slog. It has a ton of parts, many of them tiny, and requires a lot of focus to get things where they need to be. On the plus side, everything fits rather well.

So, in order to get to a point where I could paint and install the running gear, I had to get most of the construction on the lower hull knocked out. Which means this update is largely going to be focused on the turret. Which is probably fitting, since by my wild-ass guess, not counting the track pieces, the turret accounts for 83.6% of the kit’s parts.

The turret starts off rather simply. There’s a little coaxial gun to install, and then the lower turret slots up into the domed main turret. Wonderfully, there’s no glue seam to fuss with since it’s out of sight.

Then come the ERA blocks.

Each of the ERA block assemblies that sit angled out front of the turret is made up of at least five parts. The upper and lower blocks, inserts for each, and then a little PE piece that props them up at something like the proper angle.

This was definitely a job for mixed glue use. MEK (or your solvent glue of choice) for the plastic, then CA to secure the risers. To mount these frustrating things to the turret, I found the best course of action was to use a use a microbrush dipped in solvent, then dipped onto the appropriate mounting depressions. Shove the bastards on there and hold them until they start to set up – about 15 seconds.

As I was doing these I also added some fancy Voyager smoke dischargers. A total waste of money consider how buried they are.

I’d recommend working on something else in between, so you don’t go insane.

The flat blocks and their various accessories go on easily enough. Though the vinyl-ish mantlet cover? That’s going to take some flash trimming to obtain a good fit.

Work slowly. And do a happy dance when you realize that the port side ERA blocks are a lot easier, since most of them are done as long runs, rather than individual blocks.

After steadily chipping away, you’ll reach this point. Where…you could glue everything and just go for it. Me? I was deathly afraid I wouldn’t be able to get paint into some areas of the turret. So I opted to lay down a base, then finish assembly.

Once this painting was done, I added all those bits to the turret.

And built up the commander’s cupola – a little kit in its own right.

Honestly, beyond the turret, there’s not much to show. The headlights were assembled but not installed yet. Same goes for some boxes that ride atop the tube at the rear of the turret. I also got to build out the mounting racks for the aft gas cans…and that put me to a point where I could start masking off the tracks for paint.

Stay tuned for Part 3 – where the fun really begins.