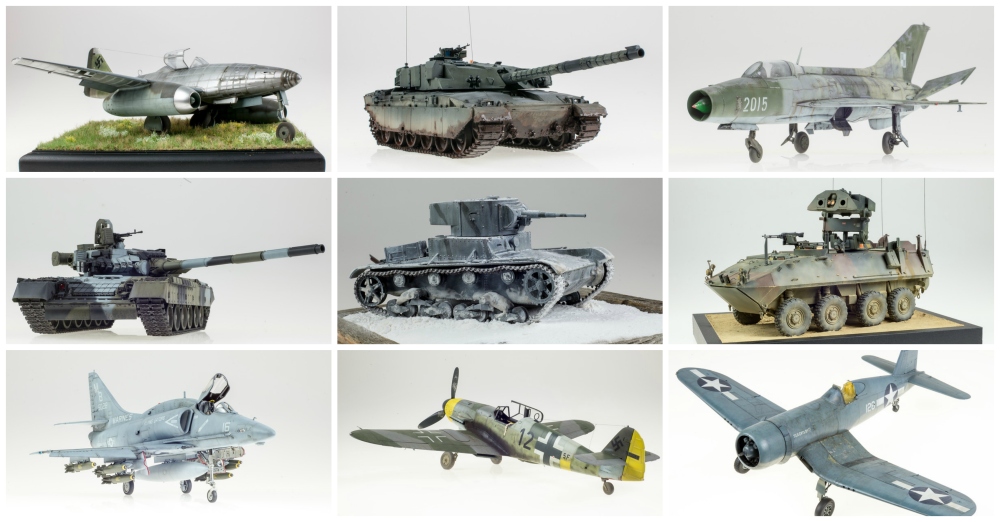 2014 is just about in the books, and so it’s time for that annual tradition – the “Year in Review” post. Looking back at 2013, it’s striking how far I’ve come in a year. Life remains hectic, but in a far more settled manner. No layoff. No shattering of routines to make way for a new kid. No major shocks, just the unrelenting pressures of a challenging-but-rewarding career and raising three young children. On whole, I have very little to complain about (though I still find ways).

In terms of modeling, I feel like 2014 was a year of both growth and frustration. Overall, I completed eight builds, just one more than last year. I’d hoped to put in a slightly better showing in that regard, but a few false starts and one build abandoned only when the decals proved to be trash definitely hampered my summer months. I feel like I rallied in the fall, however, with two builds that definitely feel like big steps forward in the quality of my building.

A few thoughts, in no particular order, and then on to the builds.

2014 began as most years do, with the old bleeding into the new. The Me 262 was a holdover from 2013 that didn’t find its way over the finish line until February, in large part due to the very complicated paint scheme and weathering. On whole, this is one of the builds I’m most proud of – from the masking of the putty lines to the weathering to the final presentation on the base.

Along with the 262, the Challenger was another build started in 2013 and completed in 2014. Largely because of interludes to work on the Messerschmitt. The Chally was also my first foray into modern armor since my childhood, and a welcome one. Growing up in the 80s and watching CNN as a rapt 11-year-old as Desert Storm unfolded, I will always have a soft spot for the military vehicles of the late Cold War. I think I still have a long way to go before I’m really comfortable with armor the way I am with aircraft, but every build is another step.

Going all the way back to 2012, I’ve been itching to build a jet. Hell, I even built two tiny 1/144 MiG-21s in that year, but I don’t think those count. The F-13 Fishbed was my “damnit, I’m going this” moment. It was also a nasty weathering challenge, replicated a faded Polish derelict. While I think I could have handled the faded and chipped paint better, I am still happy enough with the results.

Trumpeter’s T-80BV was one of those “must build now!” subjects. The tank just has a look to it, and the kit itself was spectacular, even if the separate workable track link set was an exercise in monotony. It certainly won’t be my last modern Russian tank.

Build on a lark for a forum group build, the T-26 is probably what I’d call my disappointment for the year. Techniques didn’t always work out as well as I’d hoped, and while it looks good enough, it will always be one of those I’m just not quite happy with.

The LAV-AT is similar in many ways to the T-26…lots of new stuff that didn’t always pan out. And the kit itself is a bit of a pain, with some major liabilities backed in (no clear parts…).

During the summer months, I fell into a rut. I blame this almost exclusively on Academy’s F-4B Phantom II, a frustrating kit if I’ve ever encountered one. I needed something simpler. The Skyhawk was my answer and it was only partially correct. The kit is a bipolar mix of great and terrible. But in the end it all came together into a pretty great build and a nice showcase of my black-basing technique.

Toward the end of October, I was approached about putting together a build contribution for The Weathering Magazine. While it pained me to set the Corsair aside just as it was really getting into the home stretch, it also gave me an exuse to put one of Trumpeter’s Bf 109s through its paces, which I’d been keen to do since building a Revell and a Hasegawa 109 last year. Ultimately, the kit stands about equal to the competition – far better in some regards, and lagging in others. Nobody makes the ideal 109 yet, at least not among the later variants.

This 109 will be featured in a forthcoming issue of The Weathering Magazine, so stay tuned for it.

It doesn’t seem right that the big Tamiya Birdcage is going to linger into 2015. This phenomenal kit has been on and off my bench since June, interrupted by three other builds that pulled ahead of it. Ah well, at least it will be an early 2015 finish.

Beyond that, what can I say? Tamiya has really knocked it out of the park with this Corsair. I’ve worked with some fantastic kits, including Tamiya’s own stellar Spitfire Mk.VIII, and the F4U-1 outshines them all. The fit, the engineering, the detail, it’s all top notch. People bitch about how expensive kits are these days, but in my opinion, this is a kit that absolutely justifies its price tag.