So this is the post where I get to shit all over other people’s builds!

Not really. Or at least, that is not my intent.

My intent is to talk about shading panel lines (mainly pre-shading, but also post-shading), and why – if you’re pursuing a realistic or verisimilitudinous finish, it’s a terrible technique that should be shunned and mocked.

Since there as been some confusion since I first posted this, let me elaborate on a few things.

First, let me say that pre-shading actually does some good. It gets modelers – including yours truly – thinking about paint in varying layers of opacity. For that reason alone, it’s often one of those game-changers that elevates people’s build quality, and I think that may be why so many stick with it so doggedly.

I mean, I get it. It’s contrast. And unrealistic, hyperbolic contrast is better than no contrast, right? Just look at the “house style”  Hasegawa uses to show off their new kits. It’s utterly lacking in contrast or tonal variation. It’s…awful.

But for all the good panel line shading does, it’s bullshit. Here’s why.

It’s a ton of work. For any kit worth its salt, shading all those panel lines is an exercise in concentration and swearing.

It’s unforgiving. Get a bit too happy with the airbrush and all that work is gone. Play it too cautious and you may have difficulties covering the gray primer or managing the contrast.

Third, it’s just not representative. Yes, the panel lines on some aircraft certainly do get filthy. But look closely. It’s never just the panel lines. And it’s very rarely all of the panel lines. The paint itself gets battered and dirty. Panel line pre-shading (and post-shading) totally misses this, and creates something that looks exaggerated and fake – like one of those overdone HDR images.

Note: I feel I should restate it here: if you’re going after a stylized representation, then by all means go to town. Just don’t make claims to verisimilitude. A Facebook commenter mentioned Monet, and I think that’s a fitting example! Monet was a great painter! But if he made claims impressionism was “realistic”, there would be a lot of laughing.

Look at this Spanish EF-18, for example.

There are lots of visible panel lines…but they are not uniform. And the surfaces of the aircraft itself are filthy, especially around the wingroots.

Or consider this A-6 Intruder from Desert Storm. Plenty of visible panel lines, but they’re all fairly subtle, and there’s a lot else happening on the surface.

What I’m Talking About

Now, I hate to speak ill of others’ work. And that is in no way my intent. But…I have to show examples of what I’m talking about. I’m not commenting at all on the quality of the build or even the rest of the paintwork, which in many of these examples is quite high indeed. I am only showing them to illustrate this technique/style of shading panel lines. If you’re getting upset reading this and want to get all defensive and butthurt about it, that’s okay. One of the examples I’m going to show won at the IPMS Nationals this year, so clearly there is some subjectivity at work.

UPDATE: Before showing others’ builds, I figure it’s only fitting to show my own attempts at panel shading. I was never happy with the look it gave, so I dodged away from it pretty quickly (or tended to go a step too far and cover it up!), but I do have a few examples.

First up, my Revell PV-1 Ventura. The panel shading only really pulled through on the Intermediate Blue fuselage sides.

Next, my Tamiya Dewoitine D.520. Subsequent weathering really saved this one, but this interim step is what really pushed me away from panel shading.

On to some others. I should note that I’ve gone back and revised the images shown to only feature those that have been published, widely publicized, or entered into contests. Those that have already “entered the arena”, to paraphrase Theodore Roosevelt.

First up, we have a very nice 1/32 Su-25 Frogfoot that was on the tables at ModelFiesta in San Antonio back in February. 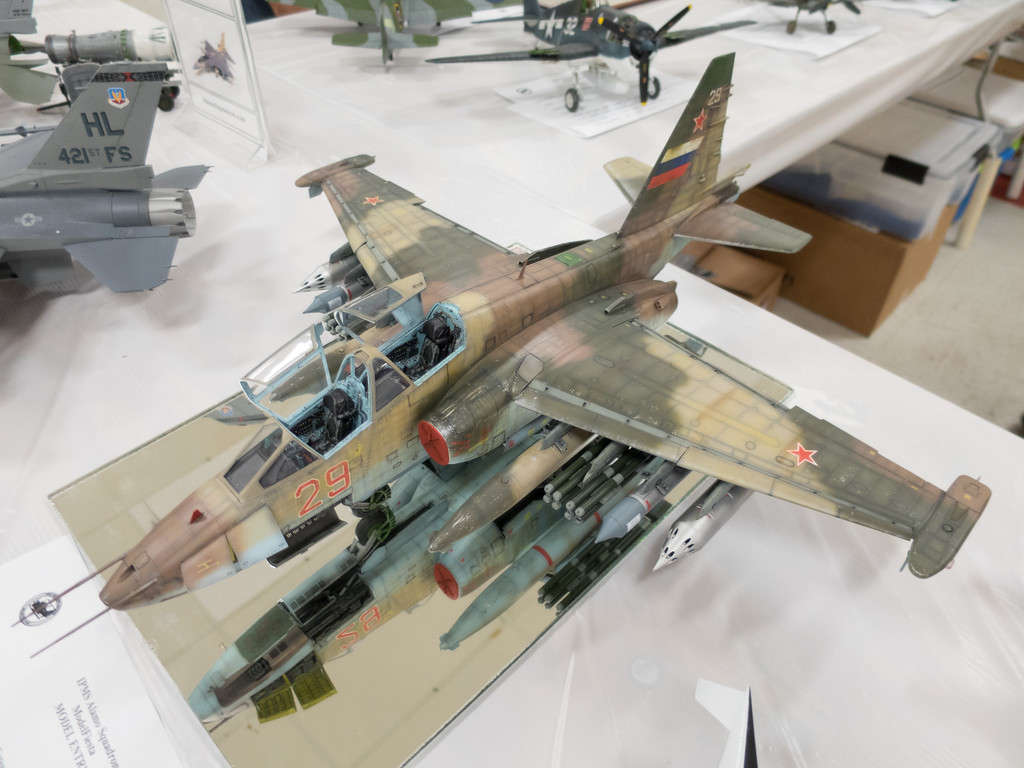 This Su-25 was beautiful…until you see those panel lines, and then you can’t unsee them. It’s like a checkerboard. 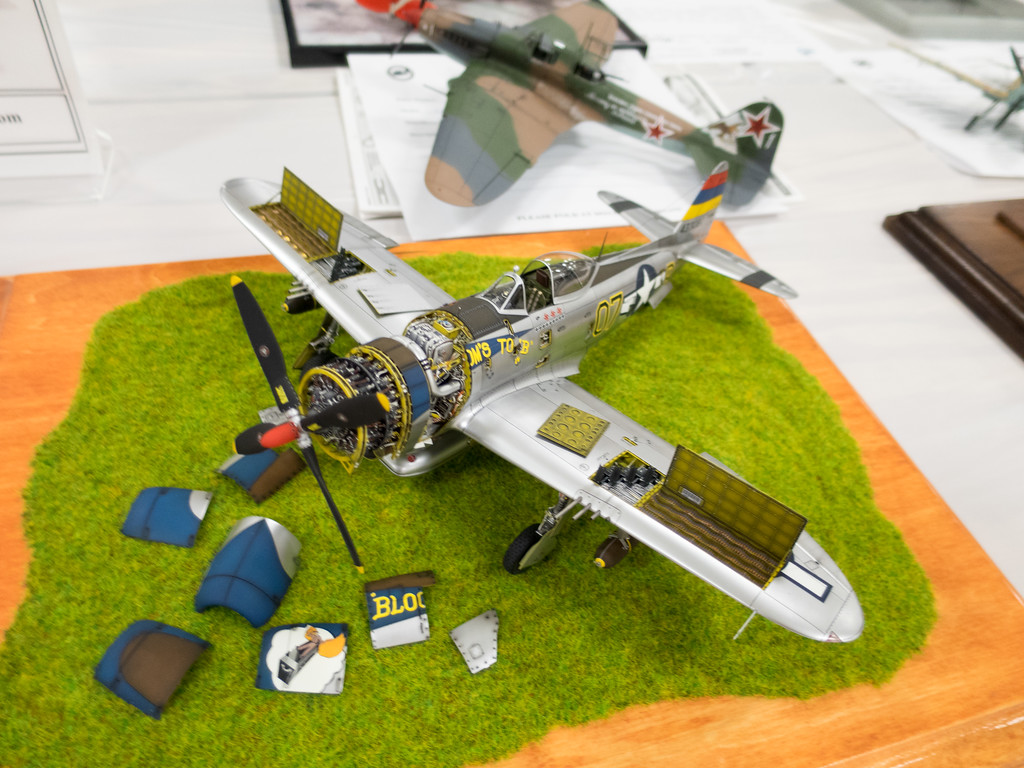 This one not only took Best in Show at ModelFiesta, it also took it at Nationals this summer. It’s a great build, and the engine detail is just phenomenal. But to my eyes if not the judges, the panel shading on the cowl panels and inside the ammo bay doors is just way too pristine. Real aircraft don’t get dirty in such a precise and uniform fashion. They also don’t just get dirty on the painted cowl.

Again, this is just not how actual aircraft weather. It creates an unrealistic contrast that sticks out like a sore thumb, while also introducing TONAL CRUSH to the rest of the paintwork.

That’s not to say a lot of these builds aren’t stunning – I think they are. I mean, just look at that B-1. It’s in primer! And it’s glorious! But the shading between panels is just so exaggerated…not something you would ever see on an aircraft fresh from the factory or at most undergoing initial flight tests.

Want to Stop Being Shady?

I used to pre-shade, until I came to see that all it was doing was swinging the pendulum too far to the other extreme.

Since that time, I’ve found several ways to still get good amounts of tonal variation – only across the entire surface, not just the panels.

Here are a few techniques I’ve come to favor (for now):

Prime in Black. Black-basing solves the contrast problem of pre-shading just the panel lines. With it, you control shading as you paint, and can introduce it into the overall surface of the aircraft. 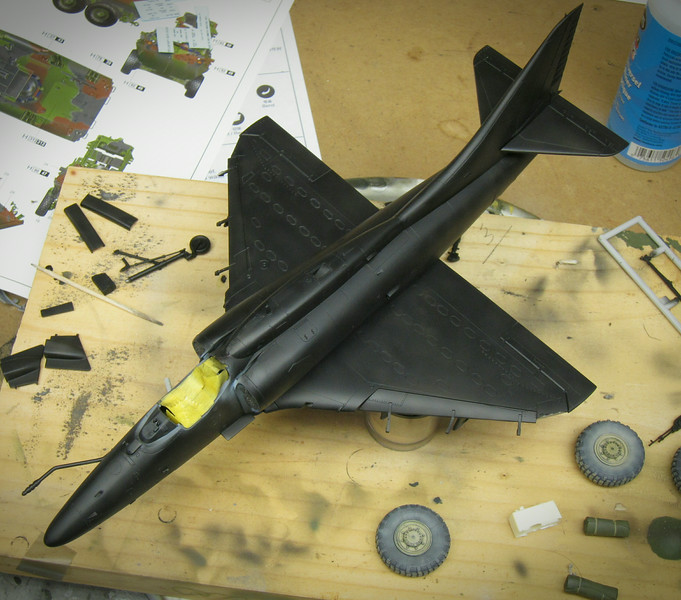 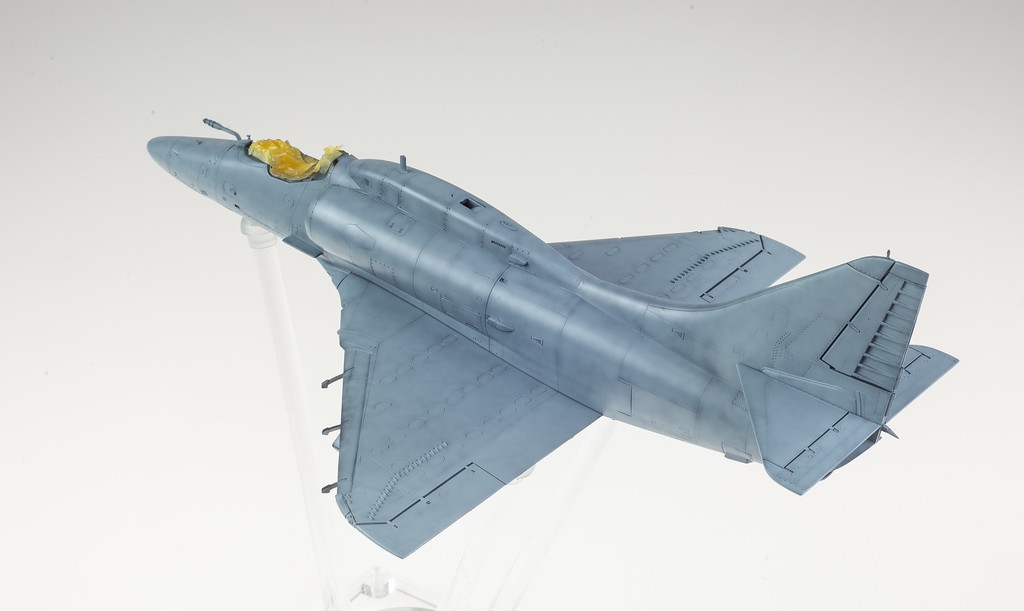 Shade in different colors. A few years ago when I was tackling Trumpeter’s P-47, I ran out of my preferred black primer, so instead I primed and then shaded with a whole lot of different dark grays, greens, browns and so on. The panel lines were very slightly darker, but nowhere near as contrasty as black-and-gray.

Combined with various weathering techniques, it gave me a wonderful surface finish where the rivets and panel lines were subtly called out, but not overpowering.

Use less-contrasty panel line washes. Not everything has to be black or dark brown. Sometimes a slightly darker gray, or a green-brown that matches well with Olive Drab make more sense. This is part of why I’ve become such a huge dork for Ammo’s panel line washes (that and how easy they are to use).

Let’s go back to that A-4F Skyhawk: 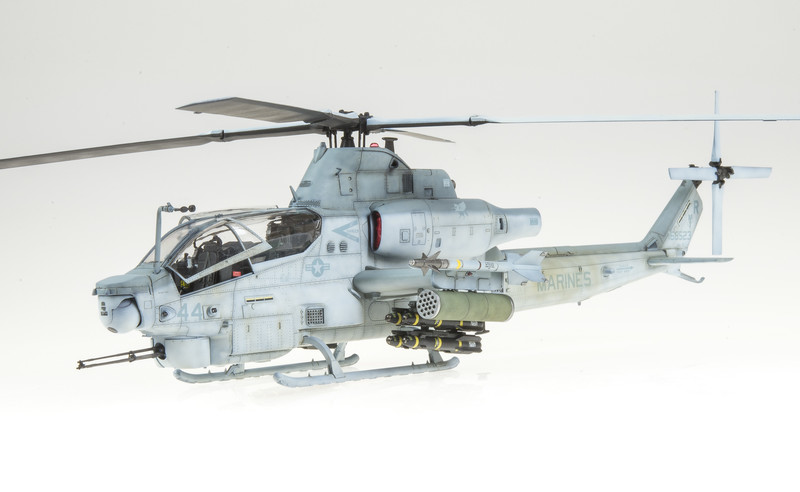 In short, my issue with all the panel shading nonsense is that it only pays attention to a specific feature of the aircraft’s surface, at the expense of the rest. As nice as the rest of the work may be, it’s a distracting and ultimately detracting element. Pay attention to the whole of the aircraft, and how all of its elements come together in a cohesive fashion.