My taste in armor subjects has evolved substantially since I got back into the hobby – away from World War II and toward the tail end of the Cold War. Judging by the kits that have been arriving on the scene over the last few years, I’m not alone in that shift, either.

Newcomers Meng, Takom and Rye Field have been leading the charge, and Trumpeter has not been quiet, either, rolling out a very nice assortment of Russian T tanks and their associated platform extensions, as well as all manner of heavy launch trucks, missiles and artillery. Tamiya’s focus on WWII Sherman platforms seems a bit out of place, and meanwhile Dragon keep churning out German subject after German subject.

For some reason over the summer, I got a bug up my ass to build Takom’s new Type 69-II. Now – this is not a very good tank. It’s a Chinese knockoff of the Russian T-54/55. But, it was used extensively by the Iraqi Army (and destroyed extensively by the Allied forces in Desert Storm). And that puts it right in my historical sweet spot. Besides, fun weathering challenges are always welcome around here. So it was off to the races.

It can be easy to confuse Takom and Meng. Both are new on the block, and both seem to have a hard time staying out of each other’s way in terms of new subjects. I would definitely have to give Meng the edge when it comes to engineering, detail, precision etc. They bake in all kinds of goodies like excellent workable tracks, workable suspension and so on. But…to date I’ve completed one Takom kit (their Leopard C2) and gotten another into paint…more than I can say for Meng.

Takom’s approach is…simpler. The Type 69-II lacks workable suspension, and the tracks supplied with the kit are the frustrating glue-and-wrap indy links that I just refuse to work with. The road wheels could benefit from larger mounting points and poly bushings instead of the nubs you have to glue them to.

The road wheels themselves are a source of frustration, too. Takom put all kinds of ribbing on the “contact patch” area of the tires, and that has to be sanded down. They also came close to greatness by molding the rubber portion separate from the wheels themselves, but then threw it all away by putting the wheel rims on the rubber “ring” portions. Ugh.

But once you get above the wheels, things improve, and I would say the upper hull and turret remind me quite a bit of old-school Tamiya armor. That is to say, it builds fast and it builds easy.

As such there’s just…not much to say about it.

Glue-together indy links are just something I refuse to deal with, so I opted for some metal Masterclub tracks. While they are nice and easier to work with than Friuls, thanks to the use of resin track pins, my set came with flash for miles. This cost me several nights and nerve endings in my thumbs removing all of the excess. 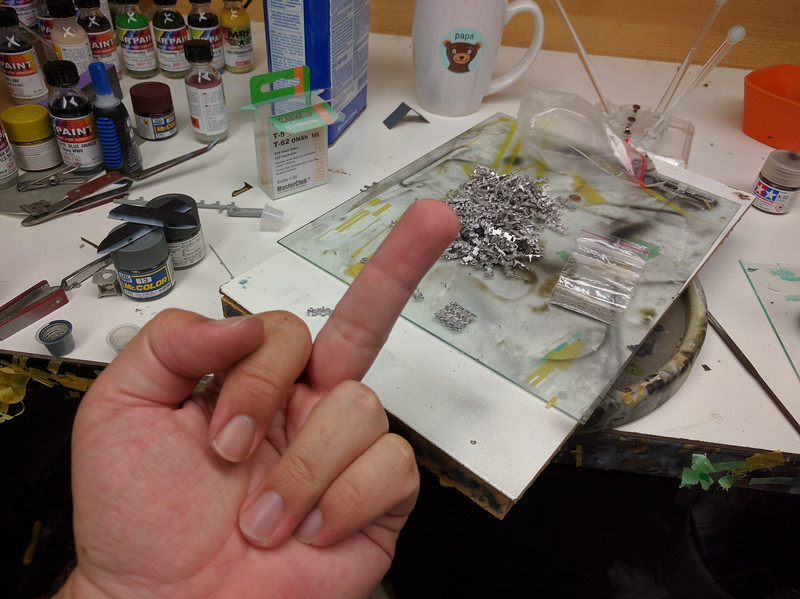 Once the tedious buildup is done, though, they look pretty slick.

Beyond the general build-up, the specific Type 69-II I’m aiming at has a few touches that aren’t included in the kit. Thus…scratchbuilding!

The first is the replacement light guard. If you look at the tank’s right fender, you’ll see the curved, diamond-plate guard that is standard on these things. The left guard looks to be something of a DIY replacement.

The second is the smoke pipes. These go into a box welded/bolted to the exhaust, and extend forward to the front of the tank. The idea, from what I can gather, is to direct smoke from the exhaust forward as sort of a poor man’s smokescreen. Anyway, it’s a cool detail I couldn’t resist tackling.

The light guard was easy enough. Just strips of evergreen cut to approximate size and then trimmed up.

The pipes were a bit of a different challenge. I decided early on I wanted to use metal tubing – but the elbows were a concern. Nobody makes elbows this small, and bending and cutting metal tubing at such sizes is beyond my abilities/patience. So I opted to use styrene rod.

My first attempt – cutting rod at a 45° angle, reversing it at gluing it – looked alright, but didn’t match the curvier elbow typically seen with piping.

Unsatisfied with that, I went back, heated some styrene rod over a candle, and then smash-bent it on the edge of some shelving. Much better. A few cuts, some drilling out of the ends, and I had my elbows. 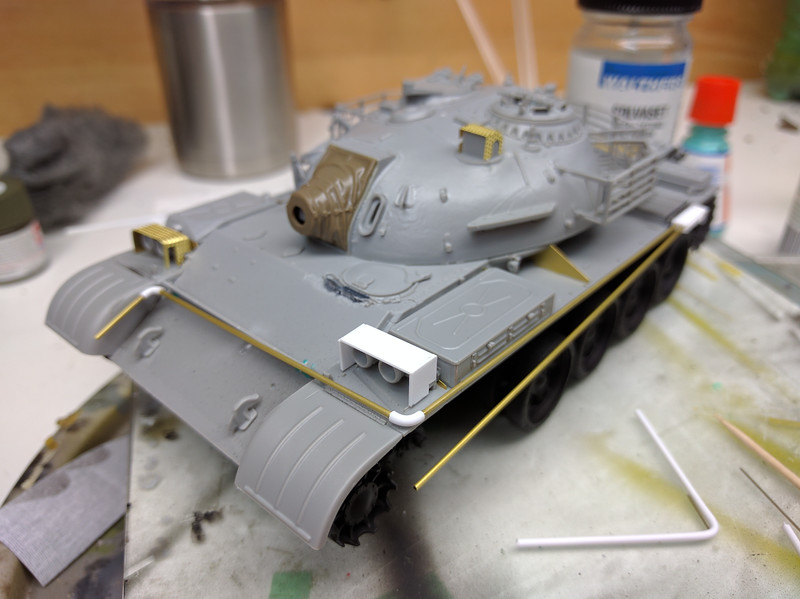 To make the elbows look a bit more authentic and replicate the flanged ends, I wrapped some Aizu tape around and then locked it in place with some extra thin super glue.

With that and some rather unremarkable work to add in a few additional details, it was time to move on to the main event – painting. 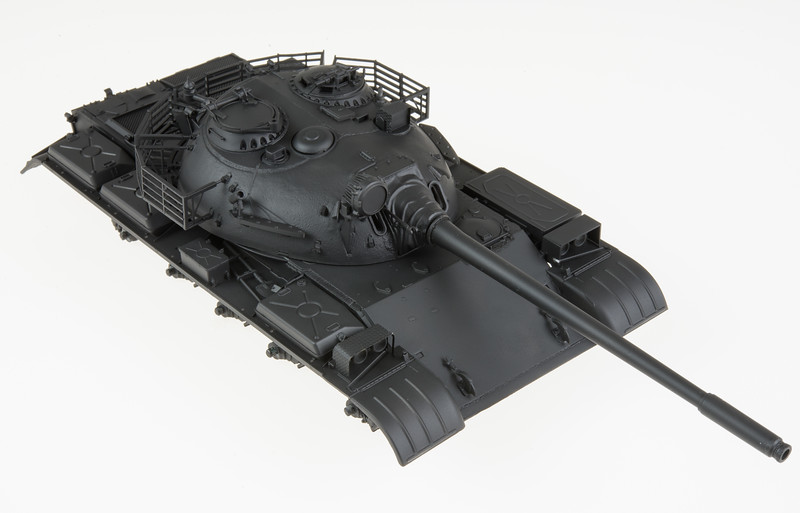 In Part 2, I’ll be walking through what will be the fairly involved paintwork for the Type 69-II. Even though it’s a monotone finish, there’s going to be a lot more to it than just spraying Sand and calling it a day.