I think there must be some kind of modeling corollary to Murphy’s Law that says “over the course of a build, something will go wrong”.

Looking back, I feel like there’s been something with every kit I’ve built.

Sometimes it’s been butterfingers – the time I spilled CA on the AccuMini Dauntless or sloshed neat lacquer thinner all over the Ki-84‘s wing while it was salted up for weathering.

Sometimes it’s been unfortunate tape-lift, like on my Trumpeter P-47.

Sometimes it’s acts of nature, like the time a gentle breeze caused my 1/32 Tamiya Corsair to slide off its stand, off the desk for a hard landing on the garage floor?

That was my experience with the Italeri F-104 and Zotz decals. Italeri totally botched the roundel sizing for the Italian schemes, so I opted to give the Zotz ones a go. And they were thick and did not settle and looked like shit. So…I got to strip them and repaint.

The F-14 Meets Its Fuckup

I’ve been working on Tamiya’s 1/48 F-14A Tomcat for a few months now, and apart from some small frustrations, it’s proven to be a rather good kit. 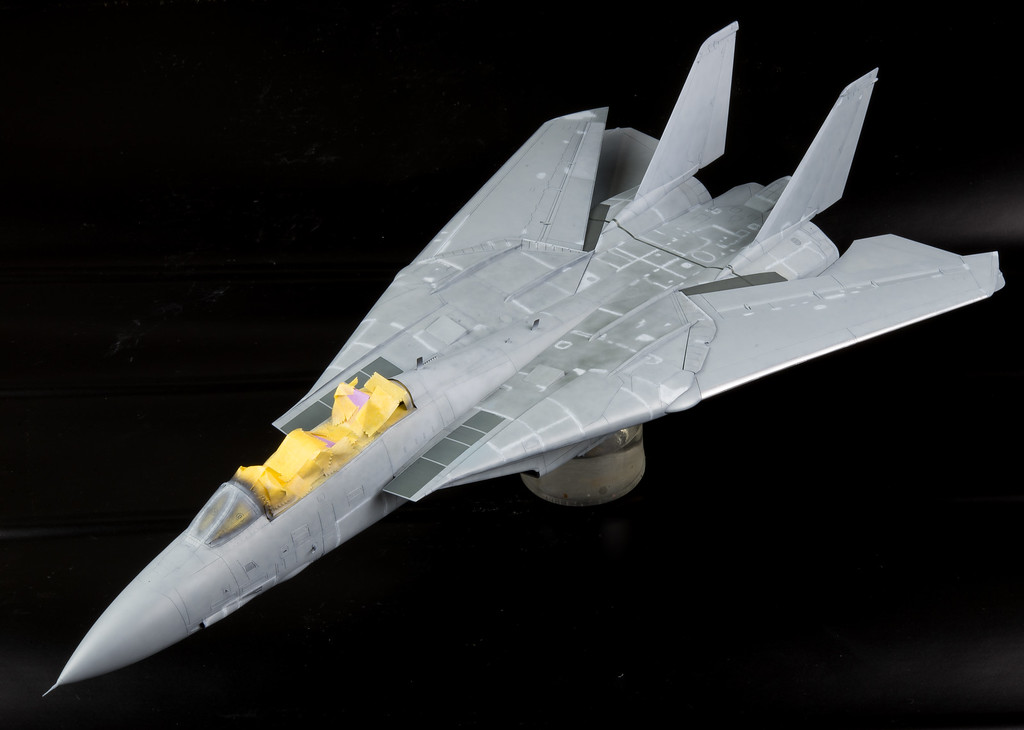 Thanks to a handy Furball sheet, I had almost all the markings I needed for this particular ship. The only things missing were the particular aircraft numbers – the modex numbers on the wings, tails and nose. That and the “USS Kitty Hawk” on the glove vanes.

So…I printed some of my own and got to work.

Along the way, I managed to mess up one of the VF-24 decals on the lower strakes…so I went ahead and made custom replacements.

The decals went down wonderfully.

Except that some of the custom decals were just woefully thick, and too fragile to take efforts to settle them down without smudging and smearing. I also faced a few other hurdles – areas of the F-14 that had been primed with Badger Stynylrez seemed to suffer some kind of degradation under Mr. Mark Setter and Mr. Mark Softer. And something else…

Midway through the decal work, I became aware of a Fightertown decal sheet depicting a later Rage 207. Not quite what I needed, but it had all the modex numbers. And considering how prominent the wing and nose numbers are, I decided I’d rather put my trust in Fightertown than my troublesome custom numbers. They were great, but they did degrade a very tiny bit under Mr. Mark Softer. Still…everything was looking pretty good…

And then I put down a sealing coat and the thick custom decals on the strakes just…fuck.

While we’re at it, the small 07s on the tails are also not great. 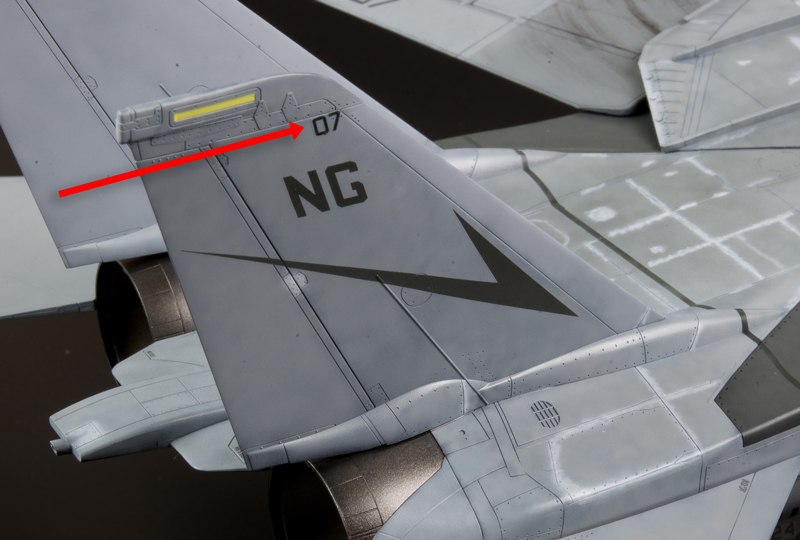 Clearly, Testors decal paper is bullshit. And clearly, I need to fix these things.

The Fix Is In

So…the need to fix this bullshit is understood. But how?

Plan A – Build and Sand

When I was finishing out the prop on Trumpeter’s Dauntless, the Hamilton Standard logos provided with the kit were just bullshit. So I stole some much better ones from Tamiya’s F4U-1A Corsair.

Thing is…the Corsair decals are Tamiya’s usual ultra-thick variety. And so they went down nicely, but were very obviously decals.

The solution? Build up a heavy coat of Gunze GX100 Gloss, which has more heft to it than your average bear, and then sand back so that the blades were level. It worked really well.

But prop blades are one thing…and if you look again at the VF-24, there’s some obvious discoloration at work as well.

Sanding it back would help a bit. But the discolored square would remain. That and if you look at the swoosh on the strake…it doesn’t carry all the way up. Which I’ll admit has bugged me – since the real world example does:

Plan B – Strip It

Simple. I’m going to do some targeted stripping, just like I did with the F-104.

What about the markings? Well – recall that I put the strake decals down before I even knew about the Fightertown sheet. Which means I’ve got a leftover set of the strake VF-24s and the tail 07s.

What I don’t have are the swooshes. But…I’ve got a cutting machine now. And while I’m still struggling with tighter detail, cutting a swoosh mask is absolutely within the realm of doable.

So, that’s the plan. Now…to execute.