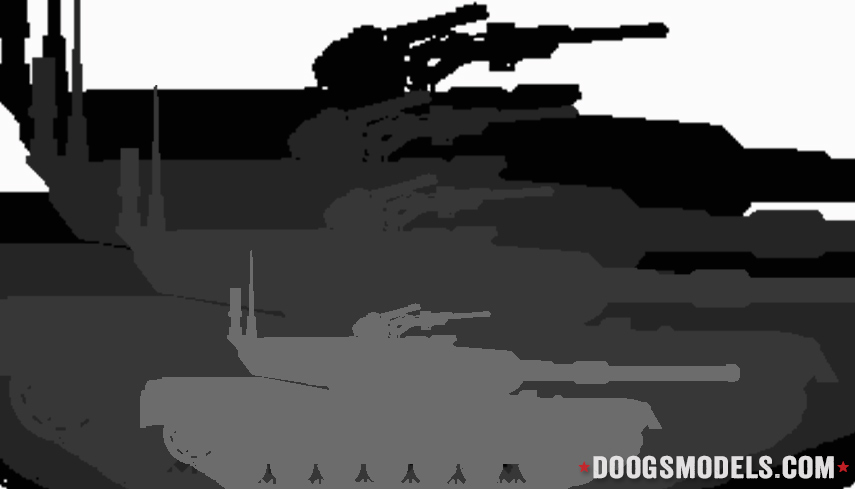 For years, I’ve lamented that we’re pretty much stuck with 1/35 scale when it comes to armor. No, not because of cross-display issues with 1/32 or anything like that. Rather, because 1/35 is kinda small. Even modern MBTs like the Abrams lack a strong sense of presence. In many ways, 1/35 is kinda like 1/48 in the aircraft world (and 1/48 armor is like 1/72 aircraft and so on).

So with 1/16 scale being all over the place lately, thanks to Trumpeter’s new M1A1 and Tamiya’s incoming M1A2 Abrams, you’d think I’d be rather excited. Armor with presence, and all that.

If 1/16 meant a ready availability of tank kits about this size, I’d be excited.

The same cannot be said for most other tanks. When you move into Tigers and T-72s and M1s, you quickly progress into the realm of the ludicrous. Just consider this.

That’s a nice progression of scales and sizes.

There should be an interim scale – say 1/24 – that would act like an armor equivalent of aircraft’s 1/32.

The cheapest price I’ve seen for Trumpy’s new Abrams is around $185, and most places are listing it well over $200. Their Jagdtiger is going for $300 on Sprue Brothers.

With prices like that, it’s going to be a challenge, I think, to build a viable, sustainable scale over time. I don’t see it becoming an alternative with a broad ecosystem of kits in the vein of 1/48 armor, or 1/32 aircraft.

Have you ever heard of the Tiger I? It’s a somewhat obscure tank from a lesser combatant in World War II.

A quick search on Sprue Brothers for “1/35 Tiger” pulls up 268 results, and about 260 of those are Tiger or King Tiger-related. Kits, dry transfers, tracks, grilles, barrels, decals, you name it.

But when I searched for “1/16 Tiger”, I only got 39 results, and most of them were not 1/16 Tiger related. Of those that were, there were some Archer dry transfers, and some shitty Peddinghaus decals. No barrels, no grilles, no tracks, no figures.

If the fucking Tiger can’t pull any aftermarket tail, what do you think is going to befall every other tank that comes out in 1/16?

5 – Back to this interim scale thing

It’s been tried. I know that Tasca came out with a 1/24 Panzer II, and it bombed because no shit. I mean…a Panzer II? Fucking really? That’d be like Marvel trying to kick off their cinematic universe with Squirrel Girl. Except not, because Squirrel Girl is awesome. But just imagine where we might be if instead of a Panzeryawnwagen II, Tasca had dropped a 1/24 Sherman or four on us.

Kitmakers rarely seem to think outside the box. I mean, we live in a world where it’s possible to buy 3D printed workable tracks…that come that way, with no need to endure the tedium of building them up link by link. And just below that we have some really great workable tracksets, be they metal or resin or injection plastic. But how many kits still come with glue-together indy links or link-and-length or rubber bands? How many wheeled subjects still torture us with bullshit vinyl tires?

To quote one of my favorite books, “show some fucking adaptability”.

Just because Trumpeter made a 1/16 T-34 a long time ago is no reason to keep pushing this bullshit scale. The market for it is tiny.

Most of the opinions I’ve seen regarding the wave of giant Abrams kits amounts to “huh, neat, too big”. I’ve seen more interest in Tamiya’s announcement of a 1/48 M1A2.

I’m convinced there’s a 1/24 scale lane that’s wide open, if only a manufacturer or two would have the guts to take it.

And besides, it’d set up cross-display possibilities with the scale auto world, making dioramas like this possible: