Why? A few reasons.

First, the MiG-23 has been a slow, steady project, but one that’s nowhere near its endpoint. In fact, I’m just about to get into the fun stuff. But it’d be nice to make some quick progress on something.

Second, the annual Austin contest is on Saturday the 14th, and it’d be nice to have one more thing to enter I guess. I’m not really expecting a tiny X-Wing to do all that great against what will probably be a table stuffed with larger Bandai kits, but whatever.

Third, my project load at work is rather intense at the moment,  and to be honest I wasn’t sure I’d have the mental bandwidth to really focus on the MiG-23. But modeling is my decompression mechanism, so…something had to be on the bench.

Fourth, a model this small and simple gave me a great reason to sit at the kitchen table with the kids while we all did something crafty. I did the X-Wing while 2 and 3 painted. It was good fun.

Fifth, I wanted to see if I could take a kit from cracking the box to finishing it up in under a week. My build rate has slowed considerably in recent years, and even on something as small as a 1/144 X-Wing, that span seems daunting.

Sixth, I’d like to have a small model that I could plop on the desk at work, and a tiny X-Wing seems like a good choice.

Priming and painting the tiny X-Wing was a quick affair. And while I primed in black as per usual, I didn’t really focus much on tonal variation since the thing is tiny anyway. 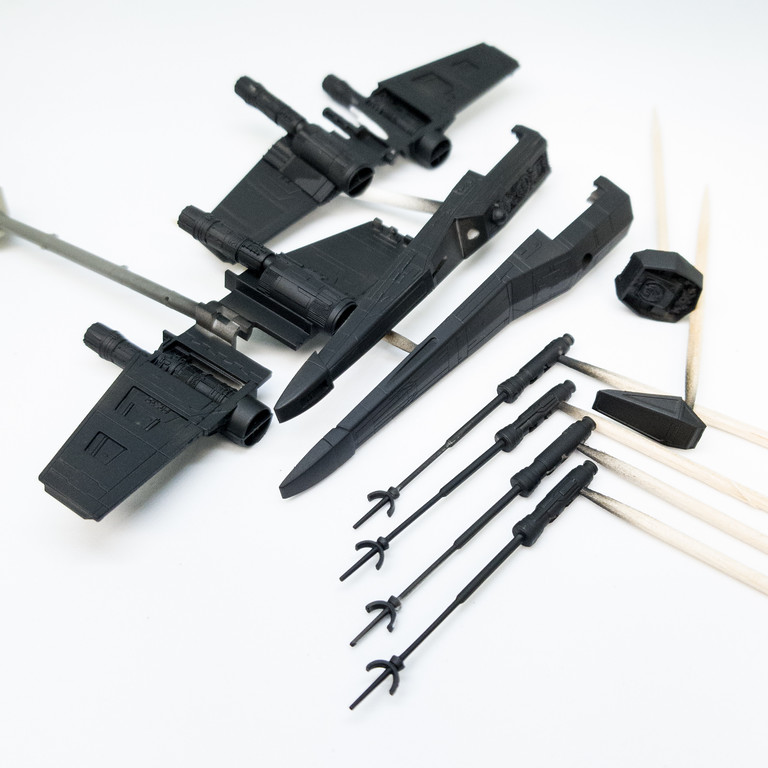 Instead of white, I opted to use MRP-256 Clear Doped Linen, which is a lovely off-white shade with a hint of warm grey to it.

For markings, I decided to use Nicholas Sagan’s excellent Blue Squadron decal sheet. It’s a bit of a pain to carefully trim out the decals since the whole sheet is carrier filmed, but the decals themselves are thin-yet-tough and conform very well. Certainly better than Bandai’s decals.

The decals are also slightly translucent, which is fine considering the monotone nature of the X-Wing’s base paint.

Oh, and the various color patches are already chipped up, which is a huge bonus.

Due to the annoying nature of Bandai’s X-Wings, I had to do the wings first, since I wouldn’t be able to easily access the inner wings once the s-foils were locked into the fuselage. 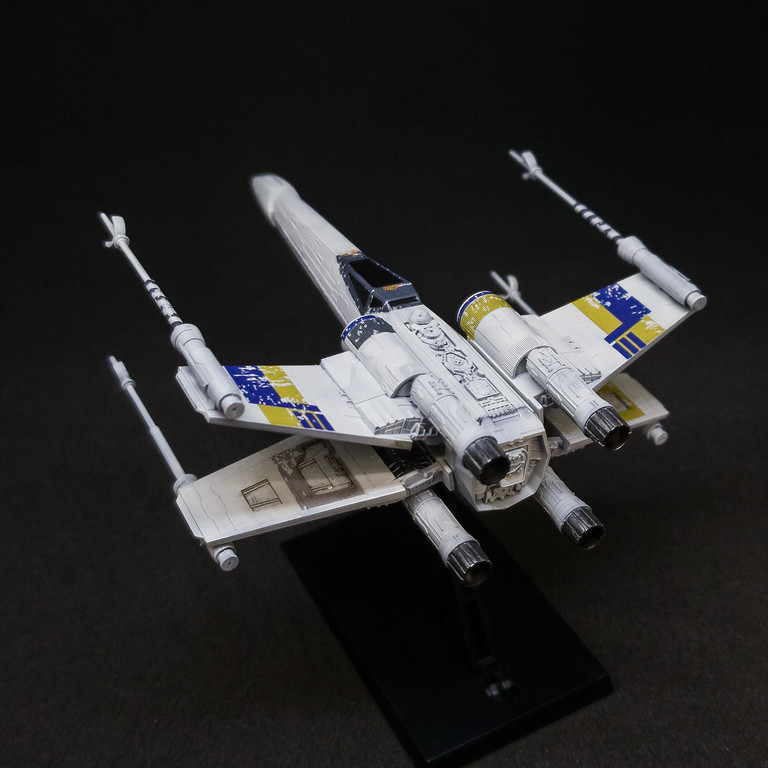 The canopy on this kit is, annoyingly, solid plastic. The canopy decal fits excellently, and the black mostly looks the part, but in an ideal world this would at least be some kind of glossy black film that could be applied.

After the wing decals were all sorted, I closed the s-foils inside the fuselage and glued the bastard tight, then went back and touched up the affected areas with paint.

Next up came the balance of the decals on the fuselage. I went a little bit free-form with these and added some additional color splashes ahead of the cockpit.

With all the decals applied, I moved straight into weathering. As it turns out, AK’s Engine Grime makes an absolutely ideal wash for the X-Wing.

While others have had issues with mineral spirits and Bandai plastic, it wasn’t an issue when I built the A-Wing, and it’s not proving to be an issue with the X-Wing either.

Some final weathering in the form of sponging some Ammo Medium Gray panel line wash on the surface. This is really something that would work better in larger scales, and here it does an okay job.

After the sponging, a coat of Gunze Mr. Color Flat Clear sealed everything up, and the diminutive Blue 3 officially moved into the Completed column. 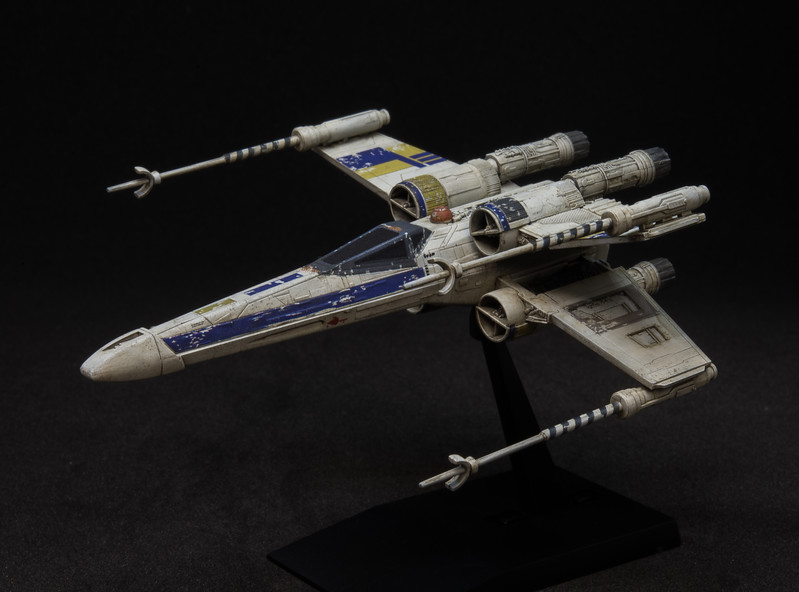 And just to show how much of a lilliputian this T-65 is, here it is next to an SD card for scale: 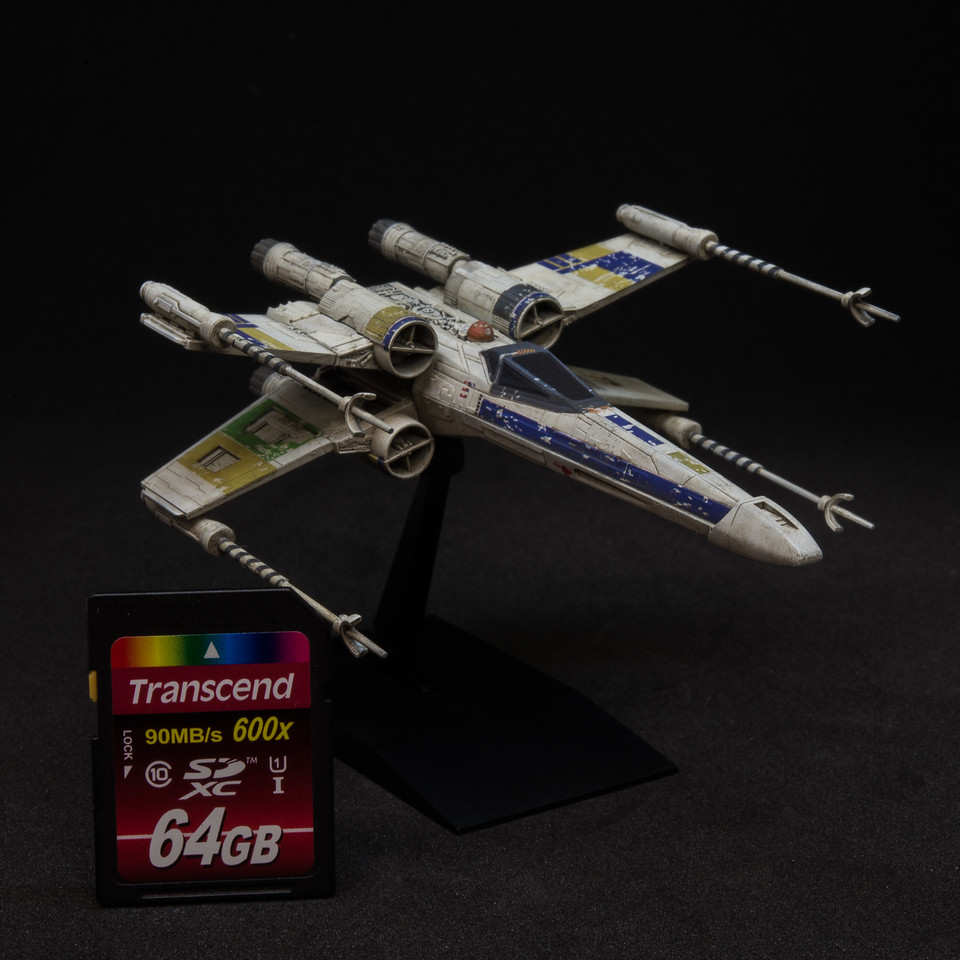 I’m not about to call this X-Wing my best work – or even anywhere close – but it provided a nice change of pace from the protracted MiG-23 build. And maybe, just maybe, it’s opened the door to an antidote to my rather bad shelf-of-doomitis. Instead a of starting another project, getting lost in it, and repeating that vicious cycle, this is more of a quick breather before diving back in. I think I may well look at picking up a few other 1/144 Bandai kits, and perhaps some Eduard MiG-21s, which I’ve built before and very much enjoyed, and see if the “quick distraction” thing holds.

What did I make of the Bandai kit itself? Overall, it’s awesome. A miniature version of their already very good 1/72 X-Wing. In some ways, I think it’s better, since you don’t have the bullshit with the body being broken up with the different colored paneling (hey Bandai, cut that shit out). But the surface detail is exquisite and the fit leaves nothing to complain about.

There are, however, four things I’d put in the minus column. They’re small complaints, but complaints nonetheless:

So…that’s it. A nice, quick build and a good six-day distraction. Now back to Floggertown!