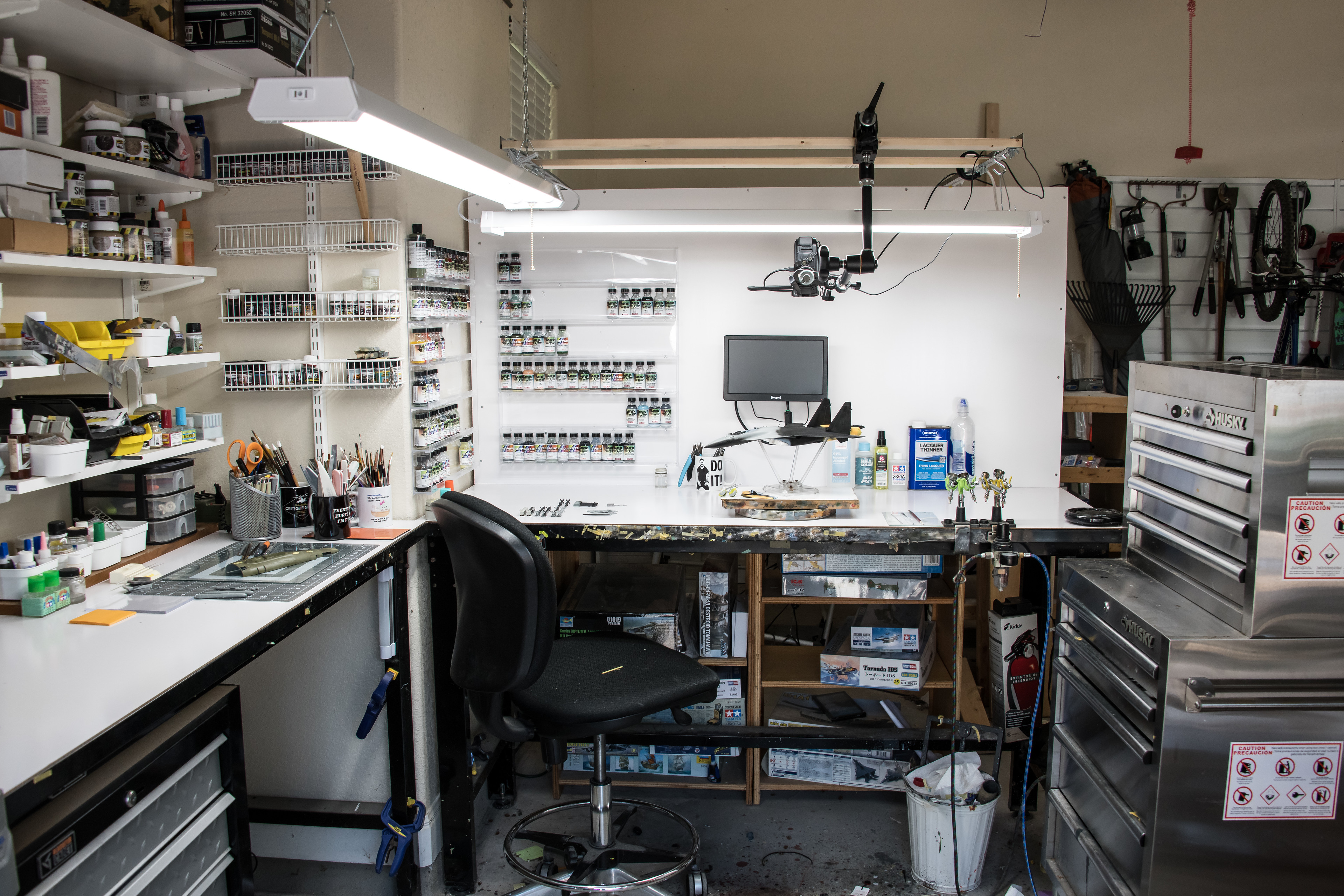 A modeler’s bench is constantly shifting and evolving, almost like a living thing. Or at least that’s the case with mine. From the time I came back to the hobby with a cheap folding table from Costco, I’ve been tinkering and rejiggering.

For the past few years, though, my bench has been *fairly* static. I’ve made a few organizational tweaks – moved some paints here, some supplies there. Swapped out the fluorescent shop lights for LEDs. But the big stuff, I’ve left mostly alone.

With a sabbatical from work, however, I’ve had the opportunity to undertake some significant adjustments. A mid-life upgrade (MLU), if you will.

Overall, I quite like my two-bench setup. Two big 66×24 shop benches arranged in an L shape around a weird corner of the garage. A large tool cabinet that holds tools, works in progress, and my selection of “pot” paints – Tamiya, Gunze and AK Real Color. Two bright shop lights. Even a monitor to help me keep tabs of framing issues while shooting videos.

But nothing is perfect, and I wanted to address four main annoyances.

Improve the spider and insect situation. My bench is in a garage. In Texas. I open the doors for ventilation, and even if I didn’t, insects find their way in. The worst by far are the tiny little spiders, a little bigger than a speck of dust, that shit webs all over everything. It’s easy enough to wipe them away, but all the nooks and crannies of the hutch that I’d repurposed to hold the light outriggers gave the little fuckers way too much purchase and it was a constant battle in warmer months (February-November) to keep them at bay. Close behind them are the rolling plagues of insects we get every year – crane flies, then june bugs, then crickets and the occasional grasshopper and cicada. Which of course the spiders catch, which means more spiders.

To help the situation, I wanted to get rid of the hutch and go for smoother, flatter surfaces that can easily be wiped down.

Reclaim bench space. I love Mr Paint. The stuff is fantastic. But the bottles do not fit in my tool cabinet the way Tamiya et al do. So I’d started using nail polish racks. These worked great, but took up a whole corner of the bench. I wanted to get them up on the wall, out of the way, but this meant…changes.

Reclaim the entire west bench. The west bench, or “construction” bench, has over the past few years become the “dumping ground” bench. It sucks having half your workspace basically unusable all the time.

Improve my video setup. Shooting good overhead video is…tricky. I’d been using a microphone arm modified to accept a ball head, but this had a tendency to jiggle, since it was mounted to the bench itself. Its range of motion also meant it was tricky to get shots up to the front edge of the bench where I normally work. I wanted a true overhead mount. 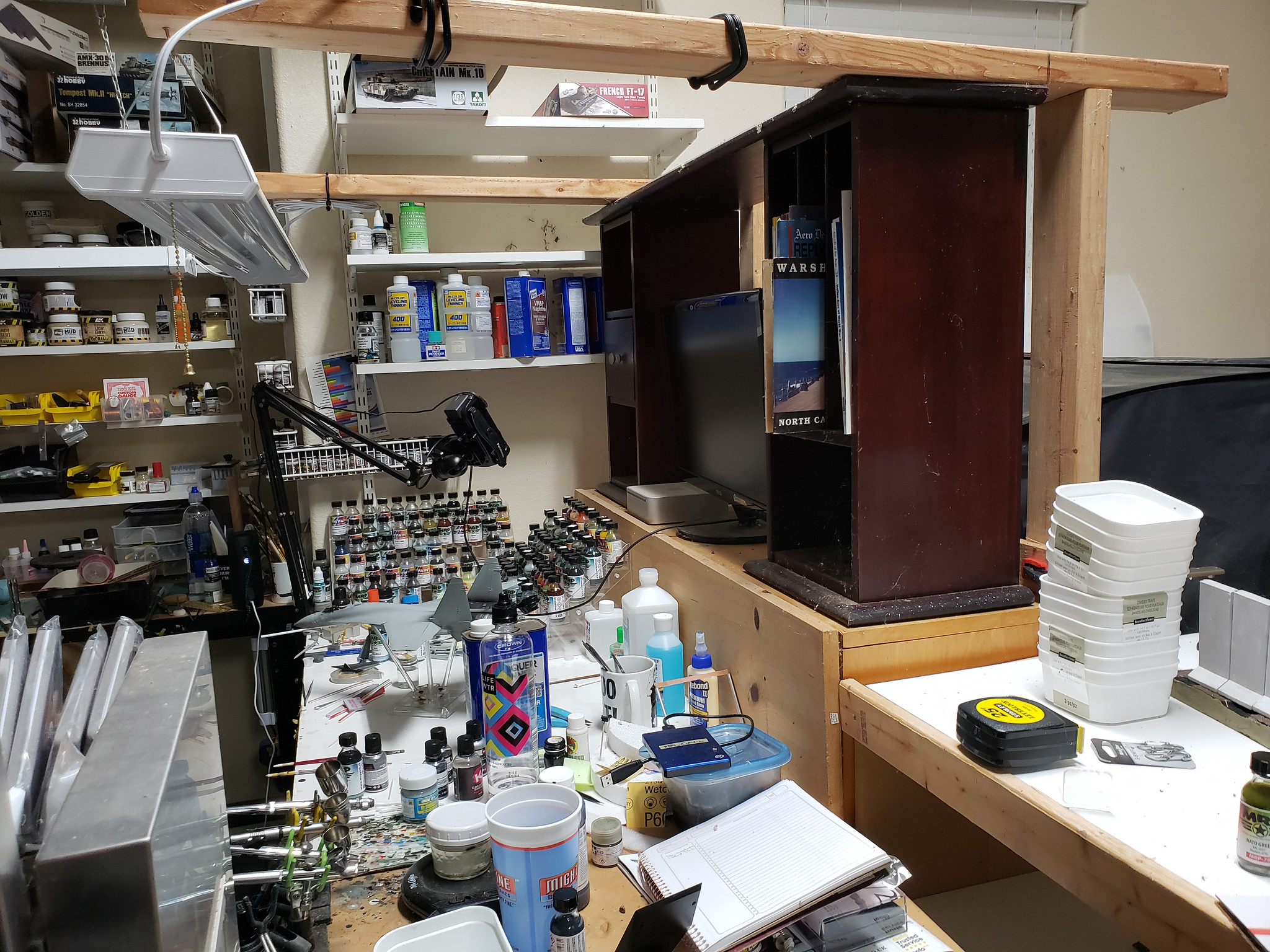 My employer has a pretty cool perk – after you hit five years, you get a five week sabbatical. Separate from the usual vacation time. Seems like lots of time to work on kits…but we’re traveling for roughly three of those weeks, so there’s time, but also lots of time away.

Rather than get some work in and then have to pause everything, I decided to use the time at home to attack the bench itself.

A few years ago, I got a piece of white hardboard to act as a work surface for the “painting” bench. Mainly for the white background for better WIP photos. Along the way, I discovered the semi-gloss surface was easy to clean of insects and shit, but also of paint. A bit of IPA brought it right back.

But my hardboard only covered about two thirds of the bench.

So this time out, I made sure to cover both benches in their entirety.

Opposite the workbenches, but the garage door, I had a massive IKEA bench that, when it was clear, I would often use for video editing and whatnot. It was rarely clear, however.

Instead of fighting that battle over and over, I replaced it with some heavy duty shelving to hold kits, boxes for WIP projects, some of my more esoteric paints, as well as various computer bits, external drives and such. 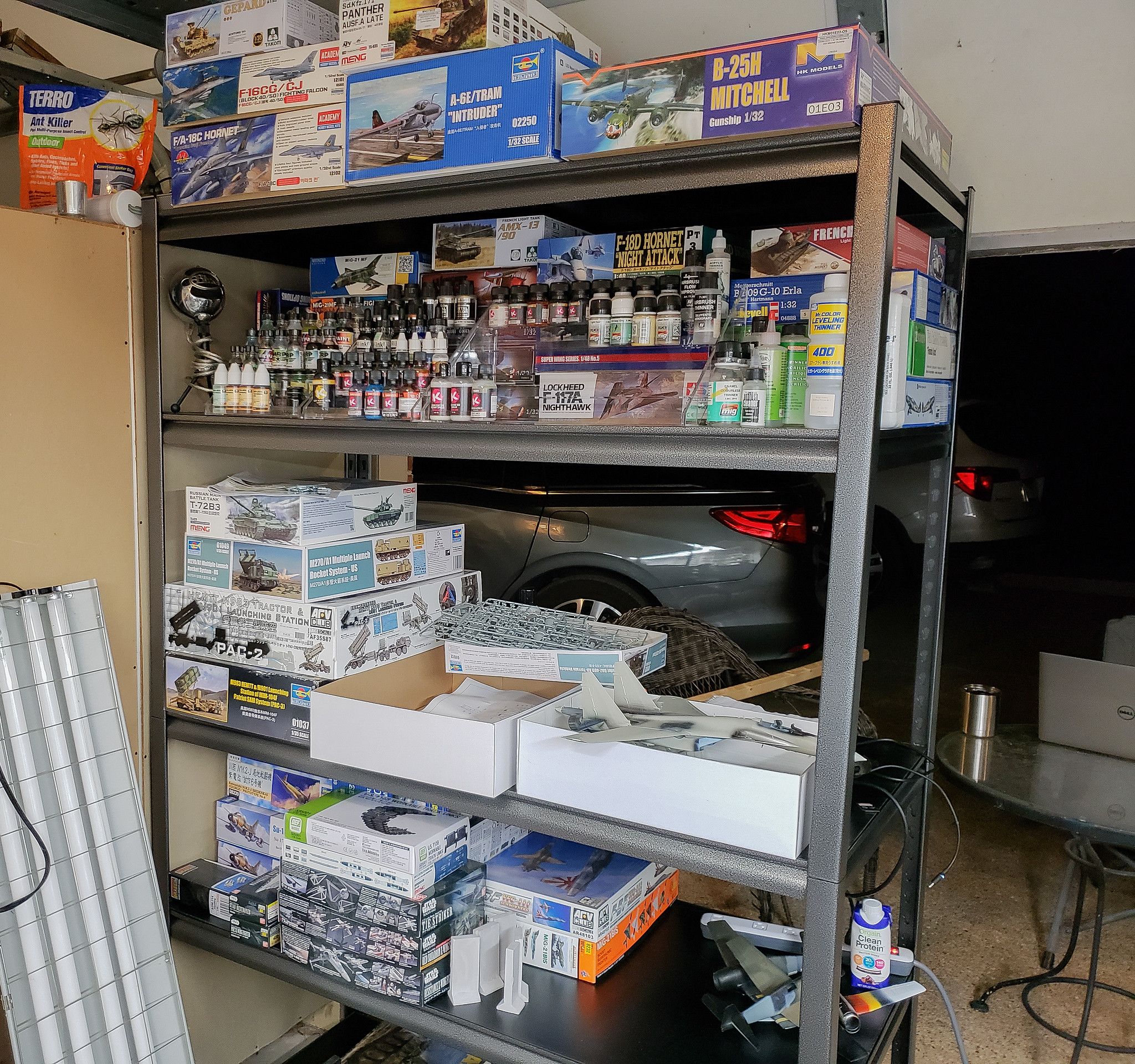 The first decision I made was that the hutch had to go. Instead, I decided to add a backsplash to the painting bench. Using wood risers bolted to holes in the bench legs as upright supports.

After agonizing over materials, I opted for 1/2″ plywood with more white hardboard mounted to it. After clamping the two together to drill out a hole for the monitor cables (AC and HDMI), I screwed the plywood in place first, and then screwed the hardboard to the plywood. Much cleaner than the old setup, with no nooks and crannies for spiders to hide in.

The monitor I’d been using was a repurposed computer monitor. It did the job, but it was huge. So I picked up a much smaller unit off Amazon, as well as an articulated wall mount. 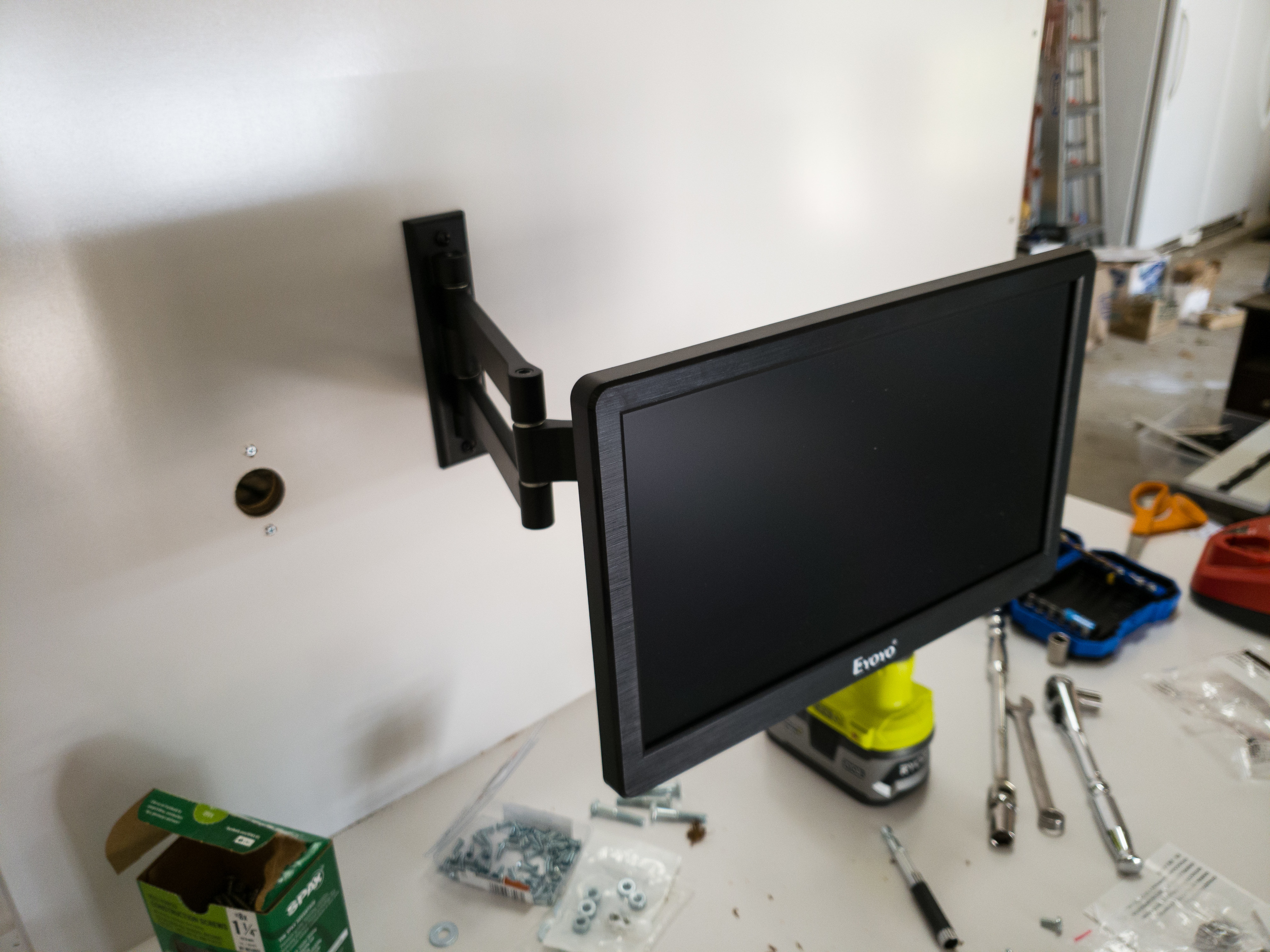 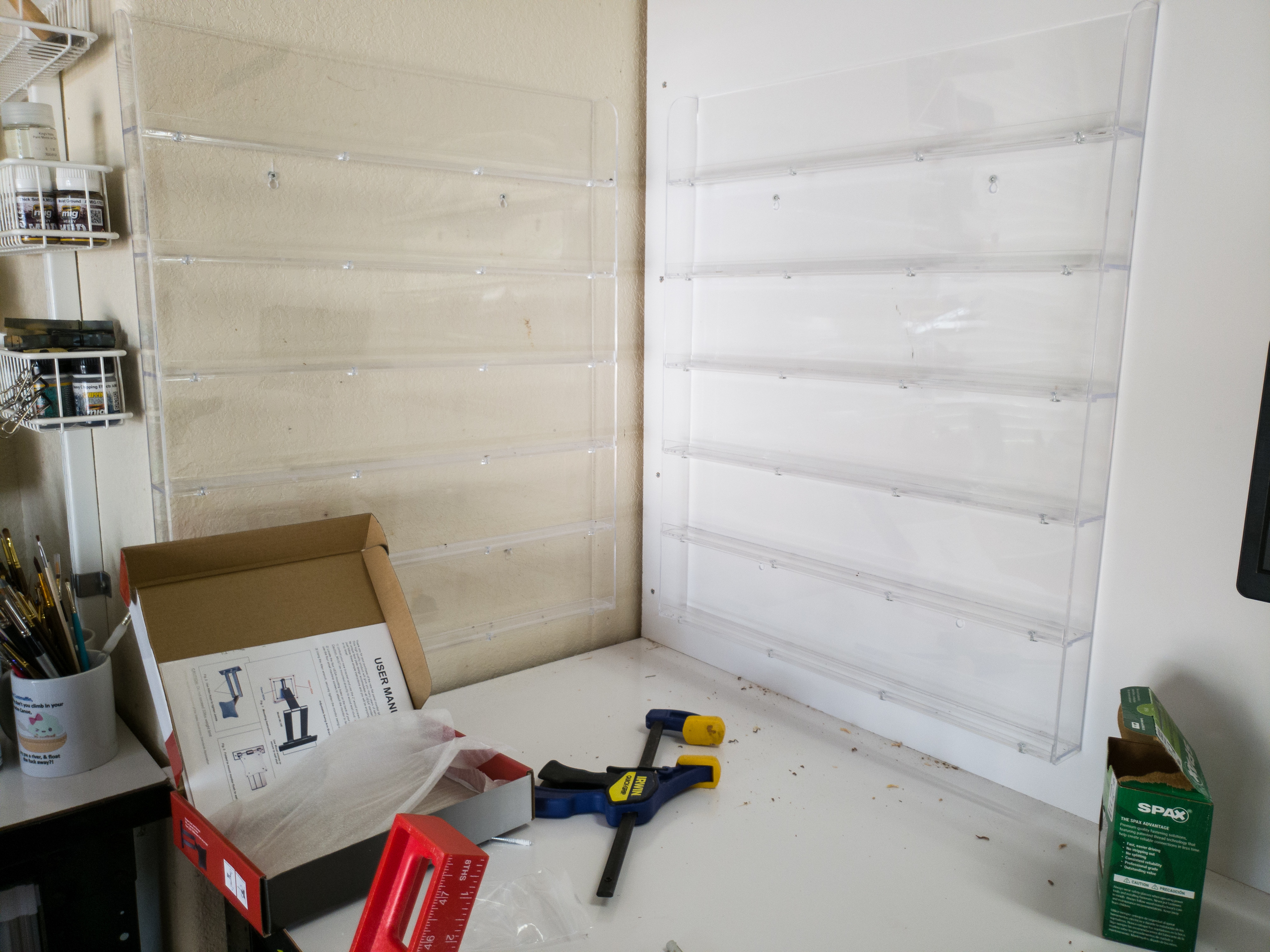 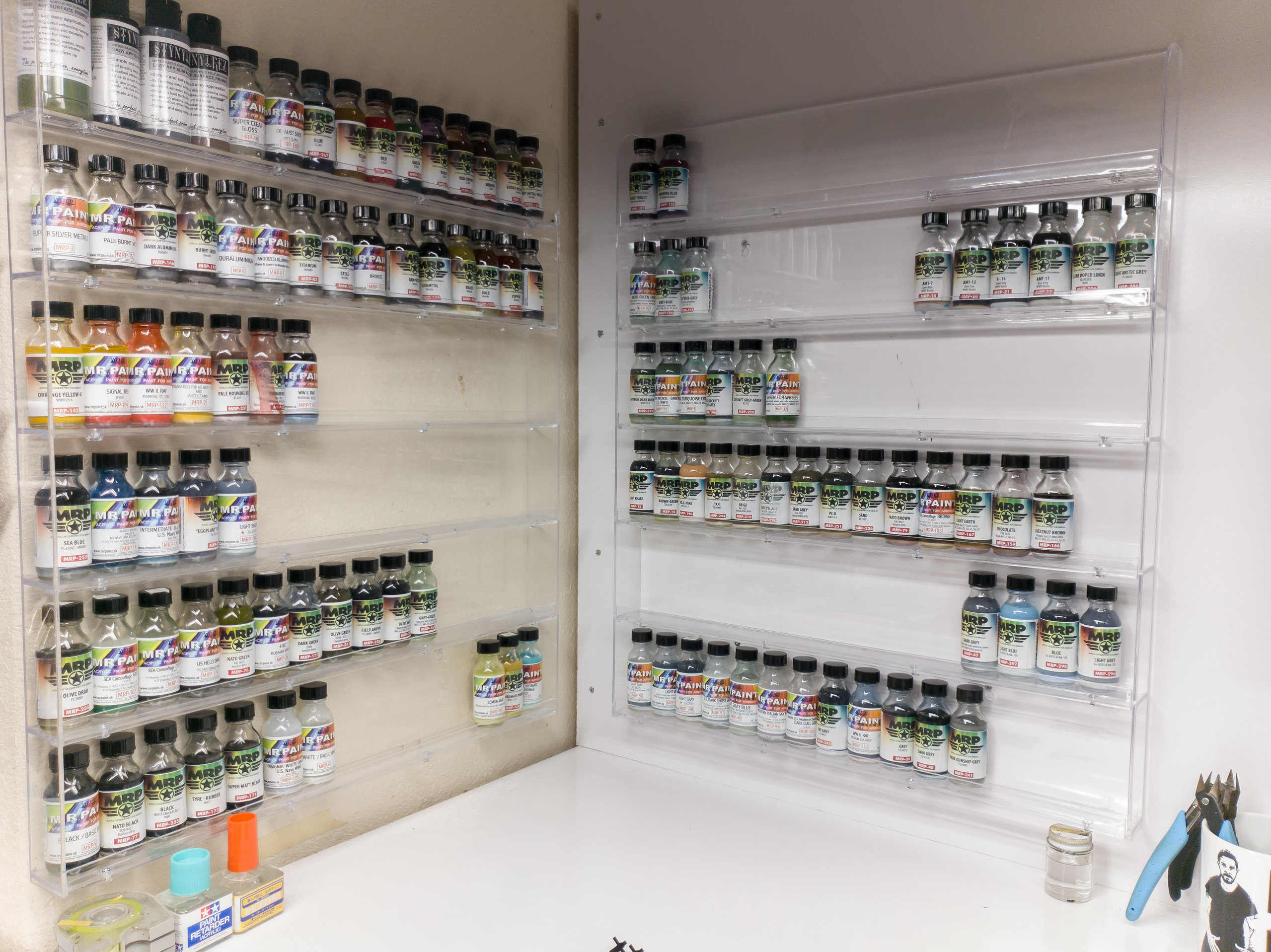 The ghetto microphone arm absolutely cannot work mounted above the desk, so I sucked it up and invested in a Manfrotto Magic Arm. And it’s amazing. Unscrew a big ass knob, and the whole thing loosens with multiple points of articulation. Tighten the knob, and it becomes immovable. Sturdy enough to hold my hefty Nikon D850 if I wished. 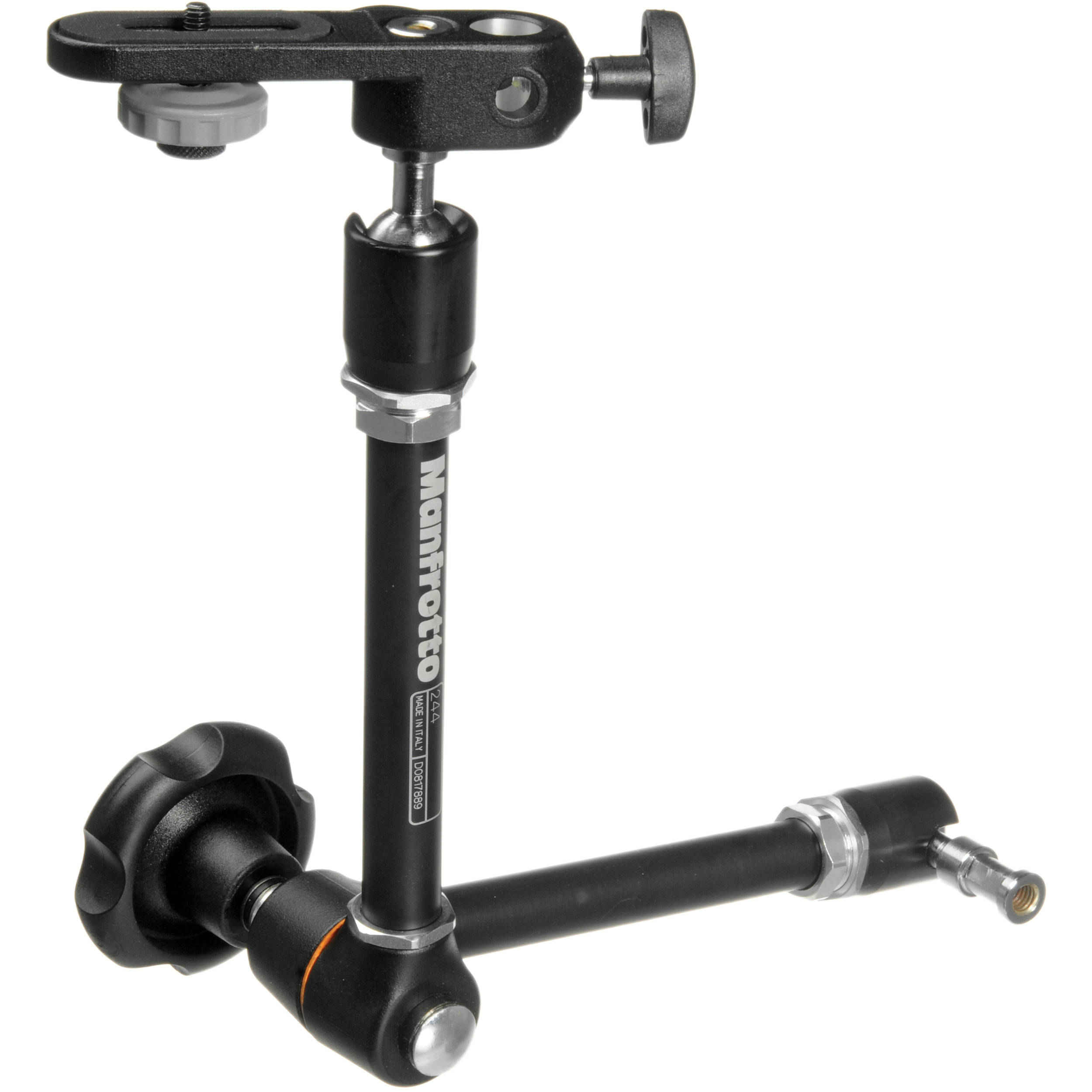 Outriggers and crossmembers, oh my

Up top, I replaced the wood outriggers I’d been using with 48″ L-shaped metal, similar to the stuff used to hang garage door openers. Lighter, sturdier, and easier to wipe down to keep the spiders at bay.

To install these, I screwed two two-foot lengths of 4×4 pine back to back atop some shitty cabinets I’ve had since the early 2000s. The 4x4s are rock solid and give just enough height to clear the backsplash. 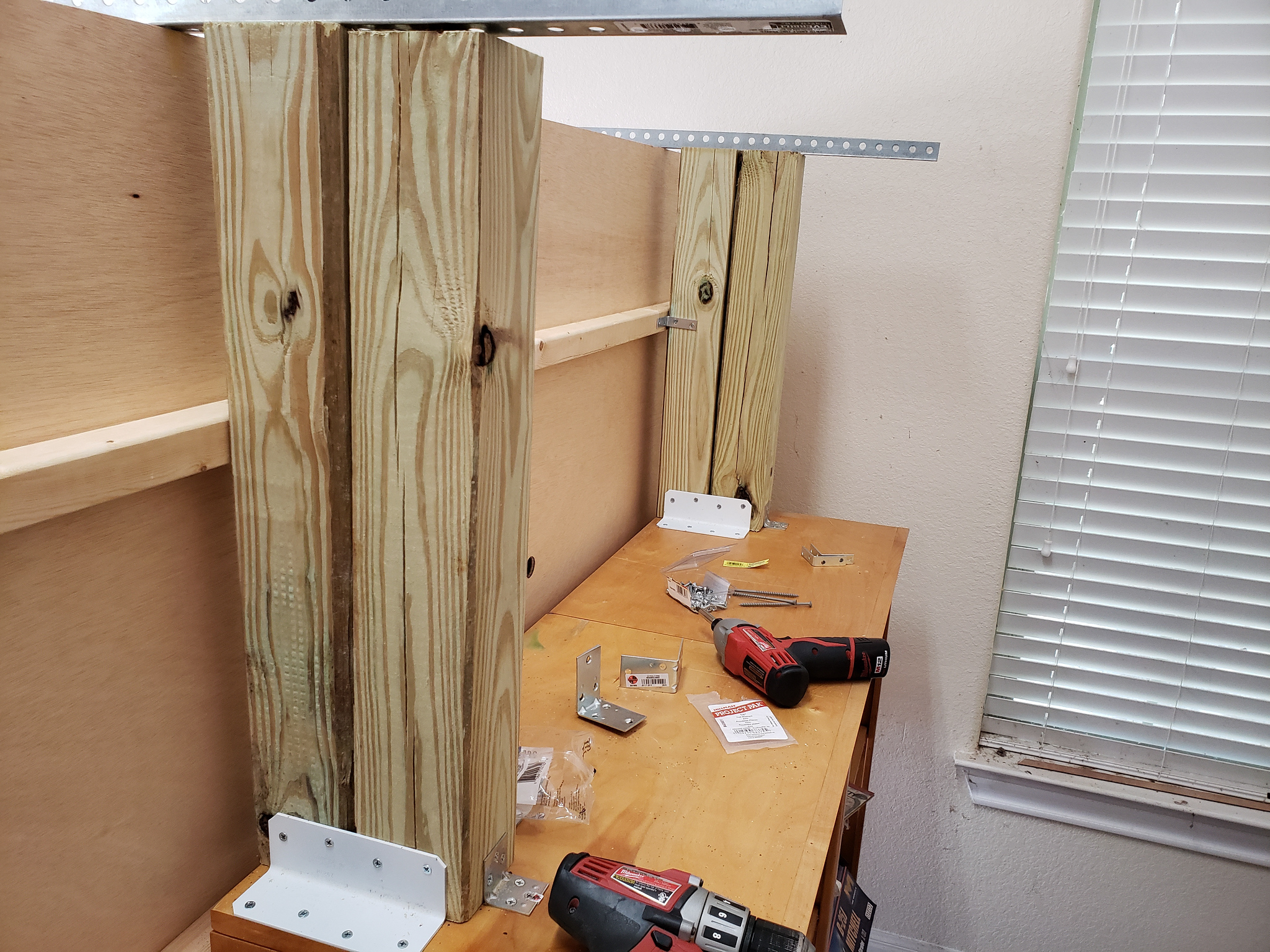 The L shape of the outriggers also gave me a perfect way to install crossmembers for mounting the Manfrotto arm. Lengths of wood rest on the horizontal portion of the outriggers, and are secured with 1/4″ bolts and wingnuts. This way I can remove them or reposition them at need.

At this point, most of the bench work is done, save for some cleanup behind the backsplash. The photo table is still all out of whack back there, and I want to move some lesser-used thinner-like-things back there, as well as some diorama supplies that don’t see anywhere near as much use as my paints and tools.

Aside from that, there’s general cleanup and organization from such a drastic upheaval. And I’m hoping to have all of that wrapped up before leaving on the next sabbatical vacation next week.

So when I come back at the end of June, I’ll be ready for a nice, fresh start. After wiping everything down for spider webs, of course. 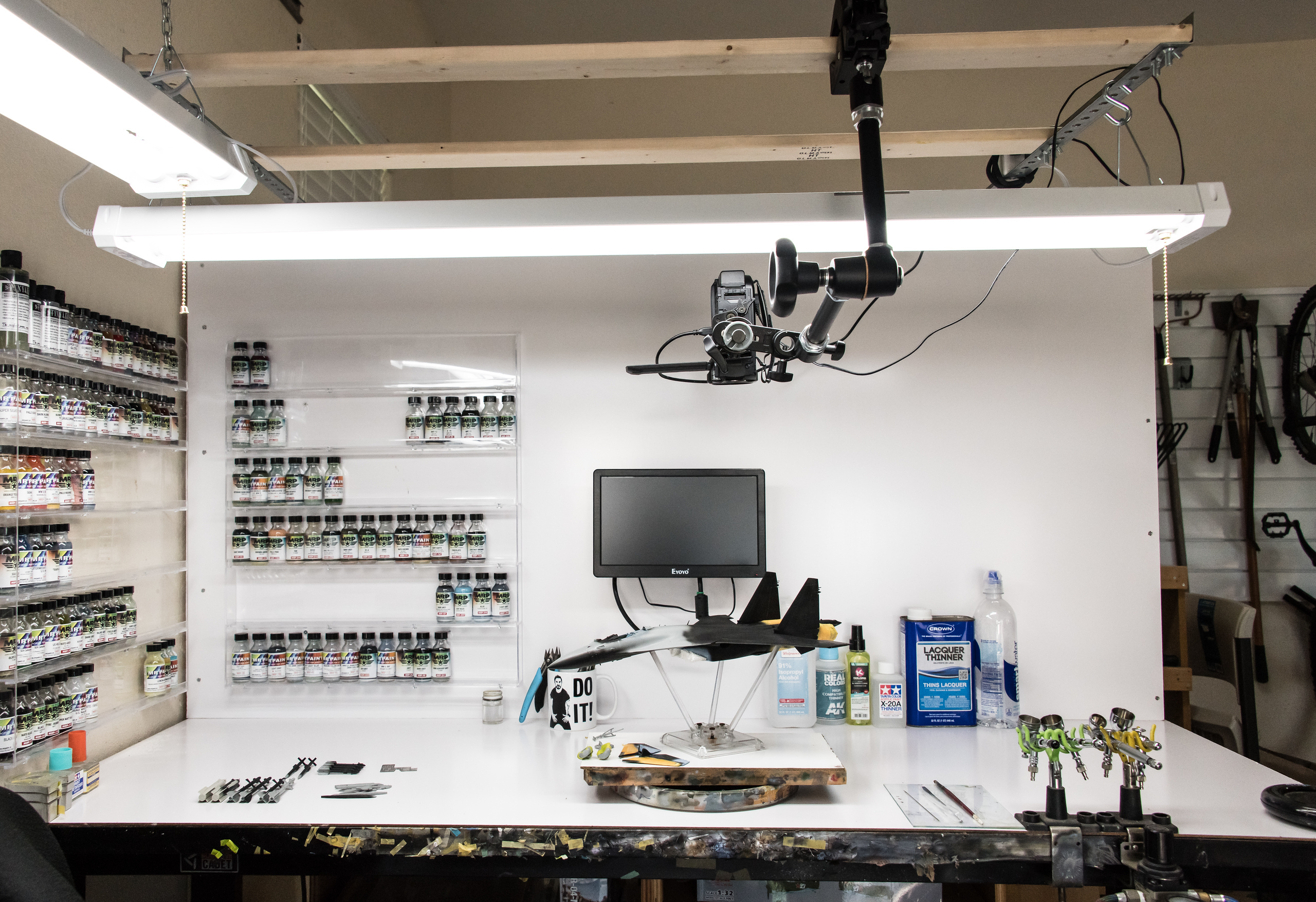 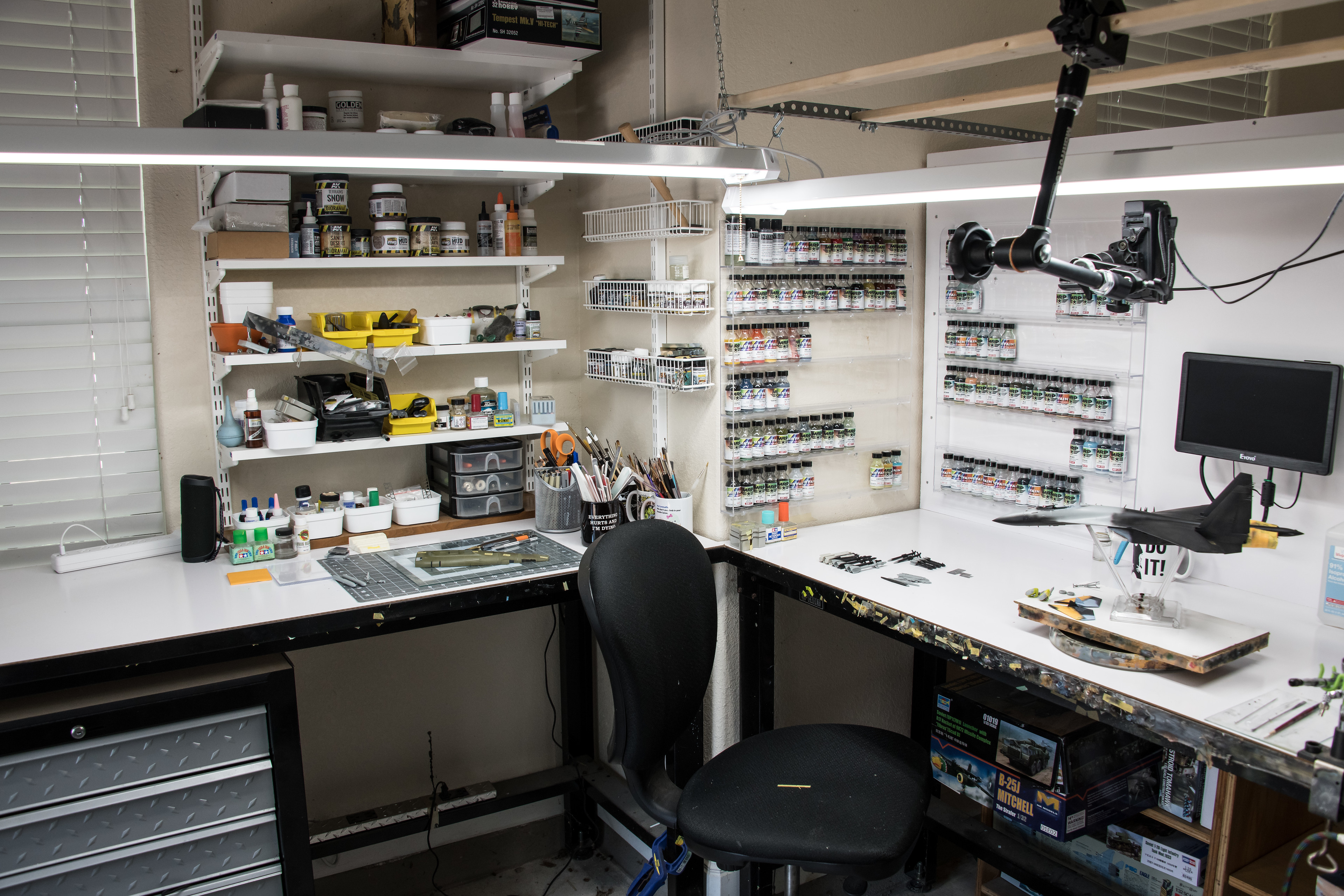