In the early days of my career, I specialized in secondary research and analysis. A lot of this involved combing through massive reams of established research – the Census, Forrester, RL Polk and so on – to answer questions, find stats, and make connections. In some industries, it’s amazing what you can draw out.

Modeling is not one of those industries. At least not with freely available materials. I haven’t looked, but an old joke we used to make about tricky research questions was that there’s always a report, and it’s always $5000. I’m sure someone, somewhere, has done some deep market study on modeling.

But I digress. Modeling, for most of us involved in it, is a bit of a black box of an industry. Manufacturers of kits and paints and aftermarket are either small, privately owned businesses, or subsidiaries of larger holding companies. We get occasional peeks behind the curtain, which we can expand on with our own relevant expertise, but there’s a lot of straight-up assumption and guessing and talking out of one’s ass that happens, too.

Recently, a prominent modeler got called out for such an instance of ass-talking, and instead of a simple mea culpa, instead went on a rambling justification that ended up borderline slandering a rather popular online retailer.

Out of some discussions in the aftermath, I decided to throw together a little survey, some market research, to maybe discover some nuances of at least a corner of this hobby. And…some nuances were found.

Now…I’m NOT a market researcher. And it’s been a decade and more since I’ve spent most of my work week elbow-deep in spreadsheets and pivot tables. And…I’ve been using the free version of Survey Monkey, which sucks ass for an kind of multivariate question. And the sampling is limited to a voluntary set from SMCG and followers of my Facebook page. As such, I wouldn’t put ultimate stock in this data. But it can still be worth some consideration.

Given the option to choose multiple subjects, this is hardly surprising. It’s been pointed out that I left out ships, and I totally did. But I’d guess, based on frequency, they’d be hovering around 10% or so. 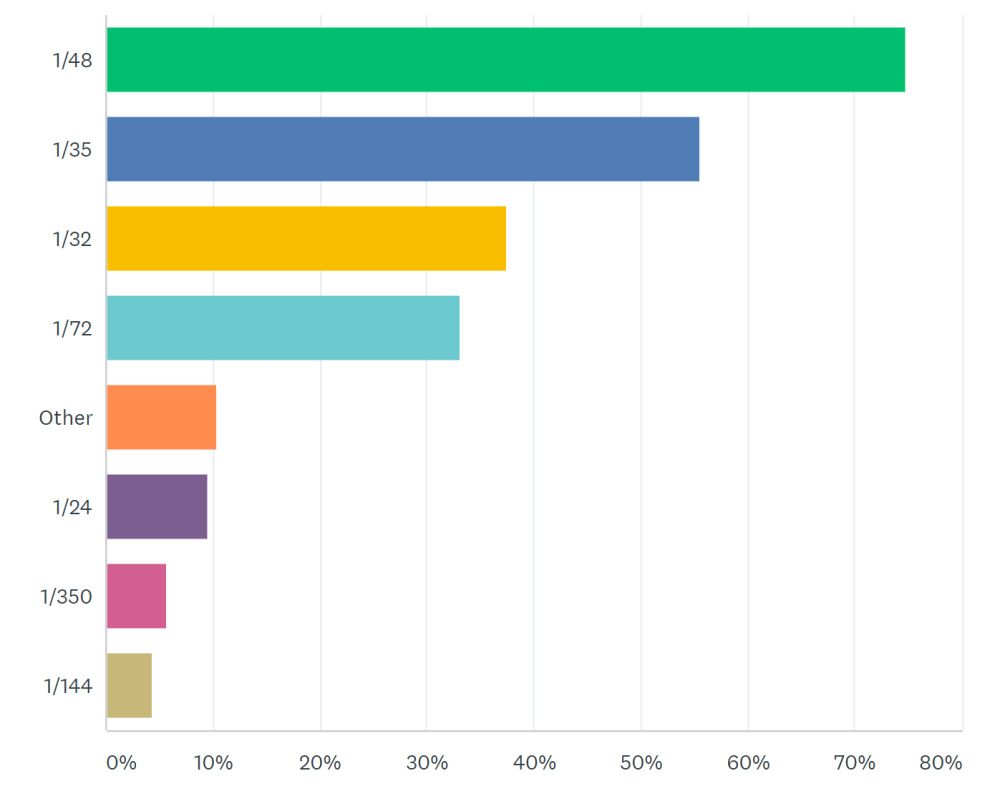 Again, there is nothing particularly surprising here.

Purchases are made all over the damn place

Now…this is a ranked and weighted list, so if a particularly retailer showed higher in a ranking, they got a higher score. And this is one where SurveyMonkey’s clunky tools perhaps polluted some data, since it was forcing rankings of all stores until I could tell it to not force that.

Still, it’s interesting, given all the wailing about the death of local hobby shops, that the main purchase location seems to be…local hobby shops. Though eBay and Amazon are not far behind.

Other is a catch-all, a mix of retailers not listed here, purchases made at contest vendor tables, in buy-sell-trade groups and the like.

The one that really stands out here, in my opinion, is Hobbyworld-USA. It’s not surprise that Sprue Brothers is way up top, but Hobbyworld-USA is something of an upstart next to, say, Squadron, which is several places lower on the list. I have my suspicions for why they place where they place.

A lot of factors determine where purchases are made, but one matters more than the others

This is a set of data that I could spend hours digging into, if I wanted to (I don’t). But even just glancing at the charts, basically, everything matters. Every single factor pings over 50% as either somewhat or critically important. Price, selection, fast shipping and customer support are all valued more highly.

But the one item that seems make-or-break is a store having the item you’re looking for in stock.

This seems like a no-brainer for sure, but it’s got interesting implications for an inventory-intensive category. It makes it a real challenge to draw purchases with a lean model. But holding so much inventory is a challenge all its own, so there’s a clear opening for some sophisticated demand modeling to optimize inventory and selection.

Different retailers dominate in different aspects of the hobby

And one of the things that has endeared Hobbyworld-USA to many of us is their stocking of Mr. Paint as well as a host of other innovative paints and supplies – Kcolors and Mission Model Paints, Aizu tape, Infini cutting boards, Gunze GX paints. This shows up in neon lights in the Hobbyworld responses, and marks what to me is a clear differentiator.

Depending on interest, I may or may not wade into the actual data to look for some more interesting insights, but these topline ones still provide some good fodder to think over.