In my recent post digging into the various mental hangups and obstructions that have been screwing with my ability to get kits off the bench in a completed state, I touched on the idea of vision:

It’s perhaps fitting that, a few days after throwing this post up, I finished my fourth build of the year, and one that was driving entirely by a strong vision.

In the afterglow of what I think might be my favorite armor build to date, at least in terms of the end result, I’ve decided to put “The Vision Thing” to the test in two upcoming builds.

Both of these builds are inspired by really strong references photos that just burrowed into my brain and insisted on being realized.

I have a lot of aircraft references that get me fired up. Like, a lot. But there’s one that keeps rising to the surface, and I’ve decided I’m going to go ahead and chase it.

That’s right. A Danish F-104G in that glorious battered green paint that seemed to be the Danish staple in the 70s and early 80s. I probably have a good dozen or so images of various Danish Starfigthers in all manner of glorious paint decay and touchup. Including this lovely one looking down from above, which is a pretty rare view.

Oh man. There’s a lot of fun to be had here.

So what kit will I be using to realize this vision? As if there were any other option: Now, I built this kit a few years ago as an Italian F-104S, and despite my frustrations over the last 10% of the build and the clunkiness of some of the final details, overall I enjoyed the kit. I also feel like I pulled my punches in painting and weathering the 104S, and sort of see this as my chance to make amends.

It has been a long time since I’ve dabbled in World War II armor. The last one that I actually completed came and went over four years ago. Since then, when I’ve built armor it’s typically been geared toward the late Cold War.

Of late though, I’ve been feeling an itch to build something VVSS (Vertical Volute Spring Suspension – the suspension used by Lees, Grants, Shermans etc). I can’t explain it, I just have.

Well, I’ve been bouncing around, considering my options. And then I came across this.

That’s an M4A1 with the 1st Armored Division in northern Italy in 1945, and holy shit is the dust and grime and leakage and staining just amazing. 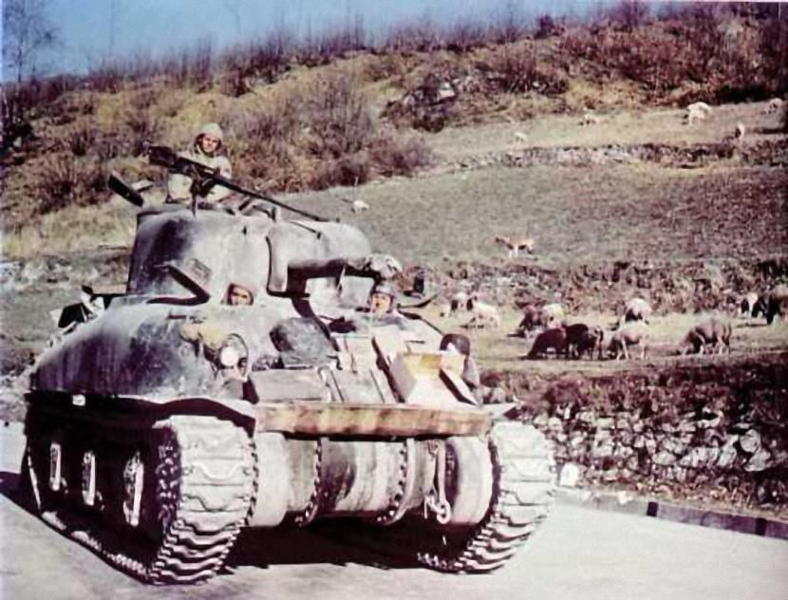 It’s hard to be 100% certain, but it looks like this lovely specimen is done up in the olive drab and black camoflage seen on a good many Shermans during the war. Which is just a further reason to take it on.

Now, for this build, I’m having to go outside my stash. I have a few Shermans, but no M4A1 mid-production with the early suspension bogies featuring the centered return roller. Fortunately, Asuka nee Tasca makes just such a Sherman. To this I’ll be adding a metal barrel (as you do), as well as probably a few aftermarket goodies to be named later.

For the moment I still have two little FT-17s to finish up. But expect both of these kits to be up and running soon. Though the Sherman may lag slightly, as I have to wait for it to cross the Pacific.

Any requests on how you would like to see these builds covered? Blog? Video? Snarky Facebook posts? Sound off in the comments.