After my deep dive on airbrushing, I’ve received several requests asking for me to discuss my cleaning process.

I get it. Cleaning sucks and it seems like it’s probably one of the top three stories people throw out about why they don’t like airbrushing.

So what the hell. Let’s talk about cleaning.

About six years ago, I was building Zvezda’s 1/48 La-5. Lovely little kit that even my newly-returned idiot self couldn’t fuck up too bad. But in the days before AKAN and Mr Paint, decent World War II VVS colors were hard to come across. I decided to order some White Ensign Colourcoats.

Color-wise, the AMT-4 and AMT-7 were gorgeous. As paints, though, they left a lot to be desired. Purportedly enamels, they thinned pretty much the way that sand thins in water – not at all. Mineral spirits, Testors enamel thinner, lacquer thinner…whatever I tried, the paint would basically swirl around for 30 seconds and then fall out of suspension and gather at the bottom of whatever container it was in.

My dumb ass decided to put this through an Iwata HP-C+.

The result on the kit was okay, but the process was an utter mess – I had to stir and dump small amounts constantly and by the end the needle channel and nozzle were packed with AMT-7 sludge.

Then, after a half-assed clean, my dumb ass decided to pull the needle and nozzle and drop them along with the airbrush body into an ultrasonic cleaner.

Are you wincing yet? You should be. The ultrasonic basically just distributed the White Ensign sludge EVERYWHERE. Including past the paint cup and all around the trigger, the air valve, the needle spring.

Despite more than five following years of strip-and-cleans on that HP-C+, and replacement of nearly every single internal part, the air valve STILL sticks regularly.

The Anatomy of an Airbrush and Where It Gets Dirty

I won’t lie, I’m having a hard time figuring out where to start here. But I guess understanding how paint moves through an airbrush and where it goes and doesn’t go is kinda important. So…this handy cutaway: 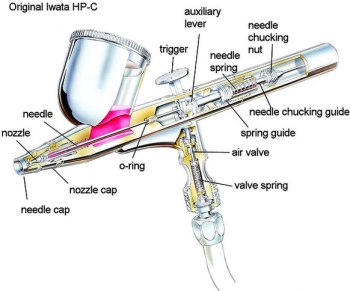 See that o-ring between the trigger and paint cup? Unless we really fuck things up (like, by putting an airbrush body into an ultrasonic cleaner), we shouldn’t have to worry about anything aft of that o-ring at all.

Forward of the o-ring, here’s what happens. You put paint into the paint cup. Gravity (or suction, with side and siphon feeds) pulls the paint into the needle channel. This is the hole in the airbrush where the needle resides. Paint flows along this channel, down the needle to the nozzle.

The nozzle cap sits over the nozzle. It’s job is essentially to channel airflow over the tip of the nozzle, which sets off the venturi effect that pulls paint off the end of the needle and sends it flinging toward whatever you’re aiming at.

Paint can buildup on the needle, of course, from the tip back to the o-ring. It can also pack up inside the nozzle – particularly thicker paints and those with larger-sized pigments. It can also build up, over time, in the needle channel or in front of the o-ring. On side- and siphon feeds, you have the addition of whatever the “transfer tube” mechanism happens to be to worry about.

But basically – that is our universe for the purposes of this post.

When talking about paint, a lot of modelers (myself included) focus heavily on spray performance, reducability, and other factors. But paint choice matters just as much when it comes to cleaning.

Some paints just clean up a lot easier – both immediately after use and days or even weeks later.

I’ve found that many water-vinyl acrylics – Vallejo and similar – may seem like they clean up easily, but can actually leave a lot of little deposity crud deep in the recesses of your airbrush – packing into the nozzle in particular.

Many metallics are similar – especially Alclads. While they seem to clean up fairly easily, it seems like you’re never quite done. Fill the cup with thinner a fifth time and there’s still little metallic bits floating around in it, like when you wipe and wipe and wipe and realize your journey is still not at an end.

Most lacquers that I’ve used, though, they clean up very quickly and easily and rarely pack up in the dark places.

Do you like strip-cleaning your airbrush? I don’t. It blows. It’s tedious, it risks damage to tiny, delicate parts that can be easy to drop (looking at you, HP-C+ nozzle), and it takes away from more enjoyable bench activities.

Good news is, you can reduce the frequency of those strip cleans by thinning your paint. I tend to spray very small and very thin – 2:1 thinner to paint is my starting ratio for Tamiya and Gunze – and I’m frequently playing closer to 3:1 or even 4:1. When I clean and flush at the end of a session, well, think of how much easier it is to flush diarrhea than, uh, chunky style. Same principle.

Lacquer Thinner is the Honey Badger of Airbrush Cleaning

Yeah, with acrylics that whole “water cleanup” thing is nice, but it only goes so far. And some paints that say that have a bad tendency to skin over in the cleanup process.

Want to stick with water or Vallejo Airbrush Cleaner or whatever? Cool. You do you. Nobody is twisting your arm.

But if you wind up with stubborn bits, introduce them to your friend Mr. Lacquer Thinner.

Clean with the Well Liquor

I’m a big advocate of thinning your paints with quality thinner. It’s not the place to skimp with potentially harsh, potentially inconsistent hardware store thinner, much less your cat’s fermented piss or whatever other homebrew solutions get tossed about.

“But Mr. Leveling Thinner is expensive!”

And a bottle, properly tended and cared for, will last you for a good long while. I just cracked a new one – my last lasted me better than a year.

But for cleanup? Bring out the bargain shit.

How I Clean My Airbrushes

So. Let’s say I’ve just finished an airbrush session at it’s time to clean up. The paint on display here isn’t even paint – it’s Mr. Finishing Surfacer 1500. A very tiny bit more of a challenge than Mr. Paint or heavily thinned Gunze.

Step 1 – Remove the excess paint. Either dump it back into the mixing container or, if it’s Mr. Paint that I didn’t have to thin, return to its bottle. This way you have a lower volume of paint to clean up.

Step 2 – Add a small amount of lacquer thinner. Just enough to cover the needle, basically. Crank up the air pressure. Direct the airbrush into your cleaning pot or the eyes or nasal passages of your enemies and let fly. This flushes out the low-hanging fruit of the paint still in the needle channel and nozzle.

Step 3 – Fill the paint cup most of the way with lacquer thinner. With a q-tip, scrub out the paint cup. It should be obvious what this does. If your paint is smeared all over or being an asshole, rinse and repeat.

Step 4 – Fill the paint cup about halfway with lacquer thinner. Q-tips are great at “wiping the bowl” but they suck at doing any kind of cleaning work up under the needle and into the needle channel. So get a trusty old paintbrush – I have a flat brush expressly for this task – and scrub around under the needle. When you’re done with that, very gently clean around the needle/nozzle tip. Flush.

Step 5 – Feeling frisky? Remove the needle, wipe it down with a q-tip soaked in lacquer thinner, dry it off and replace. But honestly I rarely do this and will usually pull and wipe down the needle at the START of a spraying session instead. With Tamiya, sometimes skipping this step will mean that the needle will stick and need a tiny bit of effort to remove. With Gunze and Mr. Paint, that’s not an issue I’ve ever had.

What? I don’t strip and clean my airbrushes down to their component parts after every color, or every session?

Fuck no. It’s overkill. It’d be like changing the oil in your car after every day’s commute.

So – with the right paint and high thinning ratios, you probably don’t need to worry about spending a half hour after every paint session cleaning your airbrush. There – that’s one less excuse not to pull it out.