Tamiya’s Challenger 1 was undertaken for two reasons. First, a weird itch I’ve developed for modern armor, and second, the desire for an easy build. When I picked it up I was coming off of my failed go at Academy’s 1/32 F-16I and was still slogging through Trumpeter’s Me 262A-2a. A legacy Tamiya armor kit seemed to be just the thing.

Along the way, the kit became an excellent foundation for working on my weathering techniques. It also became an ideal subject for a display base – something I rarely attempt.

As for the kit itself? It’s an older Tamiya kit. It can’t really stand with the latest being put out today by the likes of Dragon and Trumpeter and Meng, but it’s reasonably well-detailed, impeccably engineered, and it builds fast. 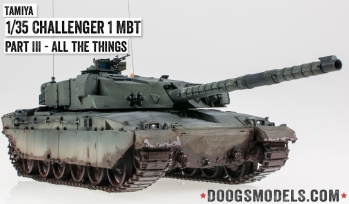