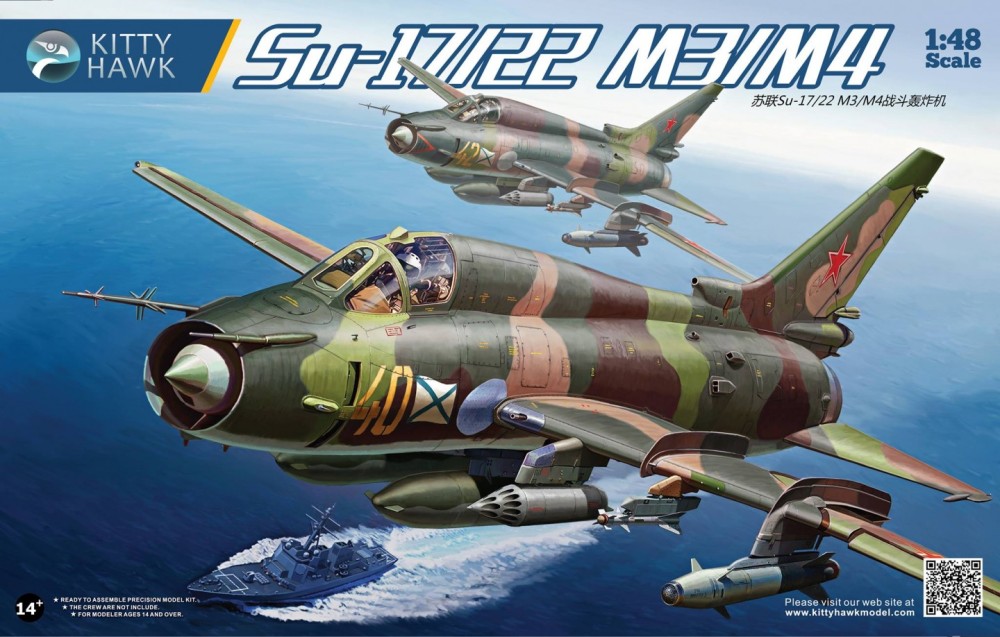 Kitty Hawk’s new 1/48 Su-17 has hit the market, and now that the plastic’s in the hands of various reviewers, thoughts are starting to trickle out.

My own copy – destined to be the third subject in the Contributor-Funded Kit Review series – should be arriving on Monday. The timing is fortuitous – my long, long build of Tamiya’s F-14 Tomcat is in the home stretch and should be wrapping up probably Sunday or Monday, so I’ll be able to crack into the build review pretty much the moment the Fitter shows up.

But I have my reservations, because come on, this is Kitty Hawk we’re talking about. They can do some good detail, and they can do some good kits as well (I really enjoyed the AH-1Z Viper), but more often than not, they shoot themselves in the foot with somehow overdone-but-poorly-thought-out engineering and the aggravating fit issues that engineering causes.

Anyway, that’s where my head’s at. Hope for the best, prepare for the worst. But apparently I don’t even have to do a build review at all! Because in a guest post over on Scale Model Soup, Red Star Models’ Paul Cotcher has proclaimed that any negative take on the kit is not only something he disagrees with, but is also, get this – incorrect.

Okay, first of all, I’m not really sure how an impression of a kit can be incorrect. We’re dealing with inherently subjective takes. Like film reviews or car reviews. There are some objective points – how long a movie is, who stars in it, how fast a car goes from 0-60 and so on – but there’s so much subjectivity wrapped into it that it’s not a matter of correct or incorrect.

Even accuracy…no kit is 100% accurate. Something will be off. So it becomes a question of inaccuracy tolerance, which is a subjective thing. The threshold for what you’re willing to accept may be different from mine. Hell – mine varies based on the subject and how many fucks I give about it. I can live with an A-7’s intake being a bit too “square”, but I will get pretty punchy about small goofs on a P-47.

I’ve written about it before in a number of ways – but, basically, different people like different shit. When you think about the four main “pillars” of any kit – detail, accuracy, engineering and fit – you have people who literally only care about accuracy, and you have others who are interested in engineering, or only have eyes for fit.

There’s also what I’ve taken to calling the “Primer Divide”. Think about what you like the most about modeling. Does that aspect come before or after you lay down primer? Some people love the building and scratchbuilding aspects. For me, it’s painting. I do enjoy building, but it’s definitely more of a means to an end. So a kit that gets a scratchbuilder’s juices flowing may leave me completely turned off, and vice versa.

So why does Paul declare negative takes on the Kitty Hawk Su-17 incorrect? In his own words:

Here is why the negative point of view, relatively speaking, is incorrect. Let me make this VERY simple:

Gonna be hard for some of you to comprehend, but…

IT’S NOT THE OEZ/KP/KOPRO/KARAYA/EDUARD KIT.

End of discussion. Somehow we’ve gotten ourselves into the practice of comparing every kit to some idealized non-existent kit that can never be achieved.

Just because a kit is better than a shitty, older kit, does not mean that it is a good kit.

We need to stop comparing against unrealistic ideals and maybe look at some more realistic comparisons – like what else is out there in the 1/48 Su-17 space? Here’s a clue: It’s that project I so lovingly described above. It was a beast to build, it was full of accuracy issues, and to get it to a similar standard, would cost three to four times as much as this new kit will cost. Fair and full disclosure – there is a Hobby Boss kit coming of the same subject – not sure when, but it’s in their catalog. Maybe that will fix the canopy issue, but from what we’ve seen of early test displays, it’s not as accurate as the Kitty Hawk kit. Beyond that, you’re hoping that somebody else does a better job, but at this point you’re hoping for something that’s FAR down the road, and nothing more than a wish at this point. Kitty Hawk, Hobby Boss, Ideal Future Kit or KP – that’s your choice.

Here’s the way I see it. Paul is seeming to imply that we should only look at kits on a single axis – how they stack up to kits of the same subject.

If you’re laser-focused on one subject, that’s fine. Over in SMCG, we’ve had two different discussions in the last few days about the “best” 1/32 Bf 109. In such a case, a single-axis comparison is worthwhile.

But it’s no guarantee of a good kit. I mean – I’d say the Revell, Hasegawa and Trumpeter late-model 109s are roughly equal, with each managing to do great in some areas and really shit the bed in others – but none of them hold a candle to Tamiya’s Corsair or HK’s Do 335 or even other kits from those three brands themselves.

And that’s the 109. What about something that’s legitimately sad-sack? Who makes the best 1/48 F7U Cutlass? Or LaGG-3? Or A-36? Calling something the “best X in this scale” is damning with faint praise if the competition is either awful or nonexistent. It’s a big fish/small pond situation.

The thing is, though, modeling is not a single axis hobby. Every time we start a new kit, we have a choice in what to build. Those kits compete for our interest, attention and dollars. And subject matter is a powerful draw, sure, but it’s not the only factor.

So this is where I like to introduce a second axis. If the x-axis is kits-of-a-certain-subject, then the y-axis is the standards of contemporary kits.

What does that mean? Simple. By today’s standards, the old Monogram P-47 is pretty sad. It’s been left in the dust by newer kits. But if you compare it to its contemporaries, for its time it was a fantastic kit.

The same holds true today. Yeah, you can hold up Kitty Hawk’s Fitter against a 20-year-old POS kit and declare it the best Fitter ever. But it’s also important to consider how it stacks up to other kits that are being released around it. How does it compare to Kinetic’s F/A-18C and Hobby Boss’ Su-27 and Tamiya’s F-14 and AMK’s MiG-31 and so on?

Because kits don’t exist in a fucking vacuum.

It’s…silly. It’d be like looking at, I don’t know, a Honda Civic. And judging the current Civic to be a good car because it has more power and gets better fuel economy and has better features than a 1995 Civic.

Would you go out and buy a new Sony HDTV because it’s so much better than the TVs they were making in 1992? Of course not. You’d shop it against Toshiba and LG and so on. Just like you’d shop a Civic against a Mazda3, Ford Focus and other similar cars.

To me this idea of some kind of Platonic ideal of a model kit is a total strawman. It’s kind of the opposite of the “well at least there’s a kit of it” argument.

I don’t see it as people wanting a perfect kit. I see negative perspectives on Kitty Hawk and Italeri and others who seem to struggle in various ways as based on frustration. Frustration that they tackle cool and interesting subjects, but tackle them in a lackluster way as compared to contemporary competitors.

Now, to be fair, there is certainly a “gotcha” mentality among some of the red arrow brigade, who love to point out any minute slip-ups, but honestly, accuracy is not and never has been the reason I see people scoff at Kitty Hawk. Most builders seem willing to forgive or correct small accuracy errors. But after being lured in time and time again by great subject choices only to face six-part fuselages and terrible fit and seams in bad locations and so on…as George W Bush once said:

The Ball is in Kitty Hawk’s Court

There’s a lot of excitement at the prospect of a good Su-17 kit. But there’s also a lot of apprehension that Kitty Hawk is the one making it. Especially with a Hobby Boss kit on the horizon, and the possibility of still more entering the fray in the near-to-mid future.

Even with all the hate that I throw Kitty Hawk’s way, I want nothing more than for them to knock this one out of the park. Because I want more good kits – and not just good relative to a sad sack from decades ago – but good relative to what else is hitting the market.

Fingers crossed that Kitty Hawk will deliver this time.